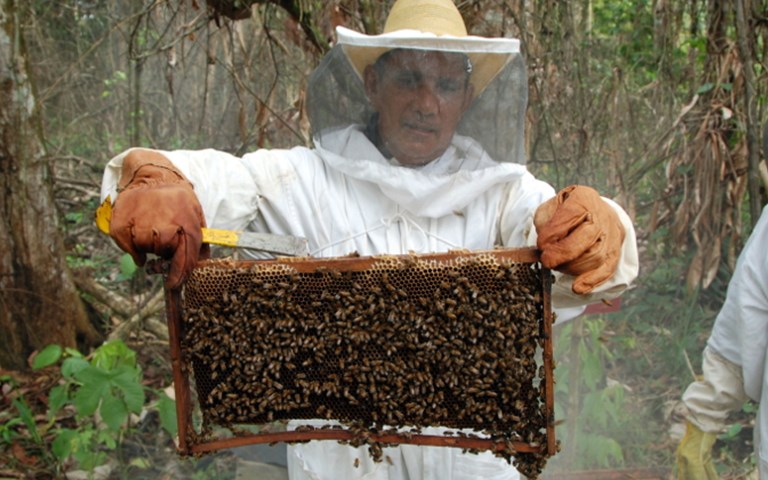 Local subsistence farmer Jose Vincent Mejia from the village of San Juan in northern Colombia shows off bees making honey in one of his seven hives. Cordoba Minerals provided Jose with training, equipment, and the first three hives. Kylie Williams

Jesus Maria Suarez looks like a typical mineral exploration project employee in his well-worn jeans and blue shirt, emblazoned with the company logo. In the mountainous jungle of northern Colombia, he is as well known to the local communities as the geologists and drillers working to delineate the high-grade copper-gold mineralization at Cordoba Minerals’ San Matias project.

But Suarez is not a mineral explorer or a driller. He is a professional beekeeper, hired by the Toronto-based mineral exploration company to teach beekeeping to the residents of San Matias, San Juan, and Alacran, three villages in the Department of Córdoba, 200 kilometres north of Medellín. Beekeeping and honey production are part of Cordoba Minerals’ extensive social program running in parallel with its advanced exploration activities.

“We never considered beekeeping until the company suggested it,” said local Everlides Pertuz (through a translator). For the last five years, Pertuz and her family have managed 10 hives set in the forest about an hour’s walk from her modest home. “Before Cordoba came, we looked for gold in the rivers and it was a very hard life. Now we use the money to buy butter and coffee.”

Pertuz and her family now produce tens of litres of honey and earn more than US$350 per harvest selling it. They have plans to transform the honey into higher-value products, such as shampoo or lip-gloss, for sale in larger cities.

Earning and maintaining a social licence to operate in this region of Colombia is complex and challenging. For many Colombians, poverty and a bloody civil war between drug cartels is all they have ever known. More than 50 years of armed conflict almost ended in mid-2016 when the Colombian government and FARC (Revolutionary Armed Forces of Colombia, the largest guerilla group in the country) signed a historic peace accord, but it was rejected by voters. The country is inching closer to peace, but slowly.

Social services and basic infrastructure have been eroded over the last half century, particularly in rural areas. Most people have little or no education, limited employment options and no savings. For villagers around the San Matias project, work was a choice between subsistence farming and artisanal mining. Scattered through the jungle surrounding the villages are illegal cocaine plantations and about 140 informal mining sites, worked by 195 traditional mining families. Mercury pollution is a significant environmental and health concern.

Don’t send in the geologists first

Cordoba Minerals is exploring a large land package surrounding the Alacran near-surface copper-gold deposit, mined for at least the last 20 years by local artisanal miners. The company has delineated several known and new areas of copper-gold mineralization. Currently the company has four drills operating at the project and in July reported visible gold in one drill hole and a 42-metre intersection of 0.92 per cent copper and 0.23 grams per tonne gold (1.10 per cent copper equivalent from 18 metres) in another.

Cordoba was aware of the social and political situation when it took on the project in 2011. Two years before any geologists set foot in the area, Cordoba sent in a social team, despite the impressive geological potential of the area. Even as a junior exploration company, Cordoba recognized the importance of investing in meaningful conversations with the community.

“One of the biggest mistakes is to send in the geologists first,” said Darney Ceballos, manager of sustainability and SH@W (Safety and Health at Work). “Geologists don’t always have the knowledge or the sensitivity.”

Related: Continental Gold aims to bring its Buriticá project in Colombia to production in 2020

Building trust over two years involved numerous meetings with local leaders and families, discovering the values important to the communities. Through extensive consultation, Cordoba learned that the communities needed jobs and training, alternative means to earn an income, as well as infrastructure, including schools, roads and generators.

In the five years since Cordoba first supplied 21 local families with training, appropriate clothing and materials for hives, the number of hives maintained by local beekeepers has grown to 82 from 15 and hundreds of litres of quality honey have been produced each year. Cordoba has committed to buy the honey from the farmers, unless they can sell for a higher price elsewhere, and to help find buyers for the honey. Elsewhere on the project, Cordoba is helping school children and community members manage waste; building and staffing schools; repairing and maintaining roads; installing water filters, generators and Wi-Fi; building dams and bridges; and employing workers and helping artisanal miners to “formalize” (register with the government and improve working and environmental conditions).

The key to initiating and maintaining social initiatives such as this is to earn their trust, said Suzette McFaul, managing director of SEF Canada Ltd., a Vancouver-based company that consults on corporate social responsibility projects to encourage and develop businesses and programs that community members will support. “Look at what already exists in the community and provide the tools to turn them into economically viable, sustainable businesses.

“Traditionally, economic development has been a top-down approach, driven by outside experts or inside leadership,” she said. “But communities often already have the knowledge and resources, what they require are the tools to take advantage of that.”

Related: Teranga Gold's Richard Young has made it his mission to develop a strong CSR strategy for the company

Fear of business failure, McFaul said, is the first barrier to overcome, and is common to entrepreneurs all over the world. But with training from Suarez and his predecessor, and support from Cordoba, government grants and United Nations programs, the community overcame these fears. Ceballos has ambitious plans to expand the beekeeping initiative to 100 families in Cordoba’s area of influence.

McFaul and her colleagues at SEF Canada are working on similar projects in many countries, mainly in South America. In 2016, SEF Canada launched Clean Gold Community Solutions, a project inspired by the company’s experience in El Oro Province, Ecuador, introducing enterprise development and economic diversification to artisanal miners and their communities. The aim is to educate and enable technological growth, providing environmentally friendly systems for gold processing, increasing artisanal miners’ benefit and profit from mining and protecting workers, their families and the environment at the same time.

“Eighty per cent of the businesses we’ve helped start are still in business after five years because we listen to the community and give them the tools and support to build sustainable businesses, rather than tell them what to do,” said McFaul.

The projects that succeed can be “literally anything,” she said, and are as diverse as the people themselves: a bug zoo for children, transportation services, baby food, a taco truck and even clothes for pet ferrets. McFaul warned mining and exploration companies not to go into economic development with a fixed idea to avoid investing hundreds of thousands of dollars in a project that may sit dormant after only a few months.

Thoughtful, informed investment in economic development has benefited Cordoba in immeasurable ways. In other parts of Colombia, blockades and invasions by artisanal miners hold up projects. By recognizing the importance of building a solid foundation with the community, Cordoba has so far prevented such disruption and the project is advancing smoothly. Hundreds of locals are employed by the company in a range of capacities, or participating in projects like beekeeping.

“It has been a blessing,” said Maria Elena Ramos, Pertuz’s daughter. “As the project grows, there are more jobs for the men, social activity and small business for the women, and education for our children.”