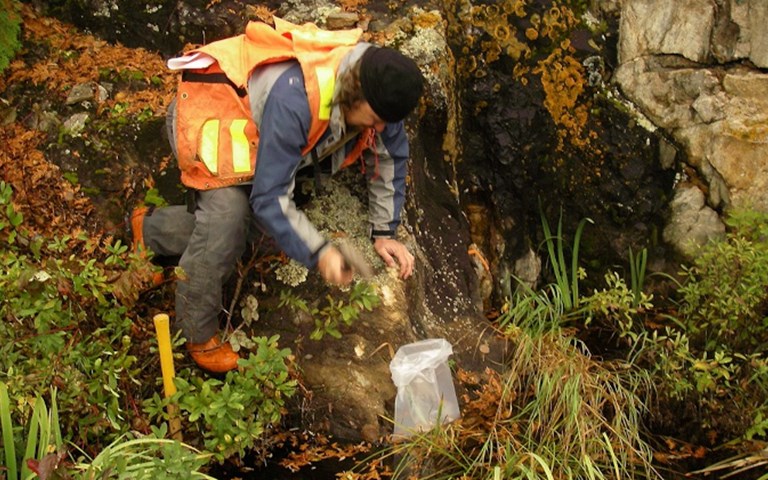 In addition to traditional prospecting work, many independents stake both on contract and for themselves, including northern Ontario prospector Karl Bjorkman and his family, who make up Bjorkman Prospecting. Courtesy of Jessica Bjorkman

Ontario is modernizing its Mining Act, introducing changes in three phases to bring the province in line with other Canadian jurisdictions. The province is the last jurisdiction to do so, and legislators hope the new Act will maintain the province’s competitive edge.

But the latest changes are also set to drastically alter the livelihood of Ontario’s prospectors – a profession that has traditionally been vital to discoveries of mineral deposits.

Amendments for Phase 3 of modernizing the Mining Act, introduced at the end of 2015 and currently making its way through the legislature, pave the way for online registration of mining claims (or online map staking) and an electronic system for administering mining lands.

The goal is to create greater efficiency in the way mining lands are administered and managed, while also recognizing indigenous and treaty rights and better respecting private landowners by ensuring less intrusive exploration.

With online map staking, mining companies simply select the area of land they want to claim on a digital map using an online registration system, thus replacing traditional staking done by prospectors working in the bush.

This has left smaller, independent prospectors fearing a major loss of income. In addition to traditional prospecting work, many independents stake both on contract and for themselves, acquiring land they then sell to mining companies at significant profit. It is work that they rely on to support their business, largely done in the winter when prospecting contracts slow. With staking now much easier to do, prospectors worry mining companies will no longer need to hire independents to stake for them.

“We will lose 50 per cent of our income overnight. That’s a tremendous loss for us,” said prospector Karl Bjorkman, whose family business Bjorkman Prospecting received the 2016 PDAC Special Achievement Award. “We stake claims to keep ourselves floating, so we can have some money to go prospecting,” he said.

Bjorkman has already had to diversify, finding work in forestry. His fear is that prospectors will be forced to find work elsewhere and that, as they do, the industry will lose a lot of professional skill and knowledge.

But the true effects of the legislation are difficult to predict. “There is the possibility of fewer discoveries,” said Garry Clark, executive director of the Ontario Prospectors Association (OPA). “But there’s also the possibility that it’s going to be cheaper to acquire ground, so companies may spend more money on the ground, therefore hiring more prospectors.”

The cost of acquiring land is another source of concern. “The price of claims is going to go up substantially for us,” said Bjorkman. “That’s going to be a really hard knock to the prospector.” Under the current system, land is inexpensive for prospectors ($61.20 for a 16-unit claim), who sell to mining companies for a hefty profit. Under the new system, everyone will pay the same amount – a fee that, although yet to be determined, will almost certainly be cheaper for companies and more expensive for prospectors, cutting into their profits. According to Bjorkman, this means that prospectors will no longer be able to operate on a level playing field with companies. “The little guys are going to be kept down,” he said.

“It’s a double whack, because we lose all this income, and then we also have to put out hard dollars to acquire land,” said Mike Tremblay, the prospector behind the Borden Lake gold discovery, which was awarded the 2013 OPA discovery of the year.

Roy Denomme, project lead for modernizing the Mining Act, said the government is listening. “We’ve done a tremendous amount of outreach through the local regional prospector groups, and held specific meetings just with prospectors and contract stakers,” he said.

“The proposed changes to the Mining Act were based on careful assessment of the impact online registration has had on the prospecting communities in other Canadian jurisdictions,” explained Phil Andrews, a spokesman for the Ministry of Northern Development and Mines (MNDM). “What we learned was that prospectors found ways to adapt, innovate and tap into new ways of deploying their services.”

Andrews said the ministry found prospectors in other jurisdictions were able to acquire previously-inaccessible mining claims, such as ones in mountainous terrain or that could only be accessed by aircraft once online staking was implemented. Online staking also allowed prospectors who found the physical requirements of staking too difficult to continue to stake claims, and for prospectors to continue contract staking for companies without “expending significant resources,” he said.

MNDM will have engagement sessions and meetings with regional prospecting associations throughout the summer and fall. The government has also introduced several programs with prospectors in mind, including the Junior Exploration Assistance Program (JEAP), implemented during Phase 2 of the modernization, which returns money to juniors that spend money on the ground. The hope is that the program will encourage companies to hire prospectors.

“They’re putting things in place to stimulate the industry, to help stimulate the exploration cycle, which will then allow more properties to be optioned, and attract more people to Ontario to work,” explained Clark. The OPA administers JEAP.

The province also announced a more formalized prospector training course, hosted by the OPA, for training future prospectors and teaching more advanced principles of prospecting. The hope, said Clark, is to encourage more young people to enter the field – something the industry desperately needs.

Tremblay, however, has doubts about the courses’ effectiveness. “There’s very few people who are tough enough to do the job,” he said.

Prospectors are turning to their regional prospecting associations to raise their concerns, as well as their recommendations for direct support. “The new Act is covering the issues of many different stakeholders, so it is a battle to keep our issues on the front lines,” said Bob Chataway, president of the Northwestern Ontario Prospectors Association (NWOPA).

One recommendation is to give companies double assessment credits if they hire a prospector, allowing them to maintain land for longer. (Companies must conduct a certain amount of exploration activity on a mining claim – the costs for which are converted into credits – to maintain the rights to explore it.)

Another recommendation is to make it easier for prospectors to obtain exploration permits and plans, given that prospecting does not alter the land like other exploration or extraction activities.

Denomme insists that some of these discussions will happen: “Once the legislation is passed, we will turn our minds to the assessment regulations, and those are some of the things we would be looking at.”

Although Tremblay agrees such measures would help, he is concerned about a loss of independence: “They’re setting this up so that it’s going to be harder for me to do it as an independent, and easier to end up as somebody else’s worker.

“I know how to survive, so I’ll figure out a way,” he said. “But I don’t see the next generation coming along.”