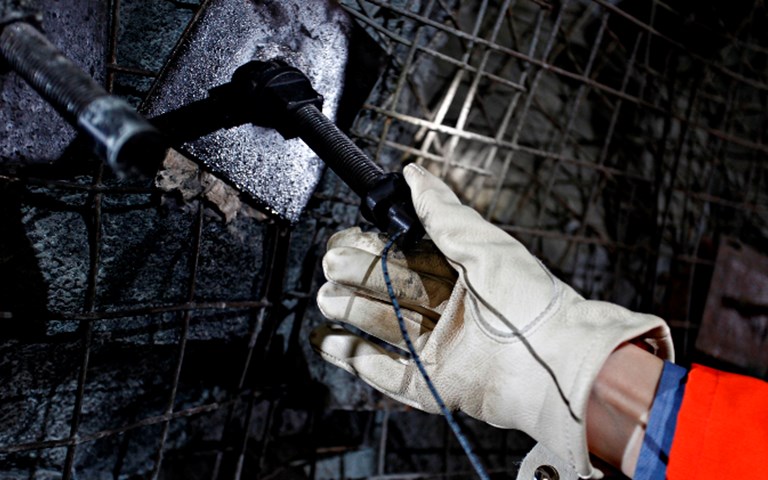 Each RBS sensor is permanently mounted to a rock bolt and contains a unique RFID tag. James Hodgins

Four years ago, researchers at Canada’s National Research Council (NRC) set out to adapt proven ultrasonic sensor technology used in the aerospace and oil and gas sectors to monitor the status of ground support in underground mines. After much research, development and testing, the resultant rock bolt sensor (RBS) began a six-month trial at an Agnico Eagle mine in March. The technology has the potential to improve ground support monitoring and prevent failures – and to be the key that opens the door to far more sophisticated ground control practices.

Between a rock and a hard place

Rock bolts are effective at stabilizing tunnels, but over time seismic activity and blasting can cause shifts in the rock mass that can impact the load bearing capacity of the bolts. This can lead to support failures and losses in productivity, rehabilitation costs, and the threat of accidents with injuries and loss of life.

“In cases where the mine is experiencing seismic issues and dynamic changes in the rock mass, it is extremely important to monitor the ground support,” said Zara Anderson, a ground control engineer and general manager for mining and geotechnical services at ESG Solutions Inc., which specializes in micro-seismic monitoring.

Monitoring ground support, however, remains a tedious and challenging manual task. There are few options today other than doing a visual check or what is known as a pull test, which involves pulling a rock bolt out to inspect its condition. The problem with pull tests, said Anderson, is that it is labour intensive and damages the tested bolt permanently. Furthermore, the results of a few tested bolts do not represent the entire rock bolt system that is installed in that area of the mine.

There are thousands of rock bolts in an average underground mine, and although some new instrumented rock bolt technologies exist, they are priced at more than US$400 per bolt so they tend to be used on a limited basis and only in critical areas.

Does the industry need and want a new rock bolt monitoring system?

In 2014, senior researcher and ultrasonic expert Zhigang Sun began to explore the possibility of adapting the ultrasonic sensor technology for ground support monitoring. The first step was to assess whether it was something the industry would find helpful, said Yves Quenneville, a business development officer with the NRC who spearheaded the project. He brought in ESG Solutions and Andriy Plugatyr, senior techno-economic analyst at the NRC, to do the research.

“Technology development can be very costly,” said Plugatyr. “Techno-economic analysis (TEA) is an essential part of R&D that allows us to better understand industry needs and, thus, minimize R&D risks. We need to talk to end users, vendors and prospective licensees to come up with a product that is needed and used by the industry.” Consultations with ground control professionals operating in eight countries on five continents revealed that the industry was indeed interested in new sensors for ground support, but only under certain conditions.

Most respondents said they were not willing to pay more than about US$100 for each sensored rock bolt. They also wanted the technology to be robust and easy to install and use.

“The industry doesn’t want to have something complicated that needs a lot of software to run and takes a long time to get values,” said Roger Lacroix, manager of program ground control at NRCan’s CanmetMINING, which collaborated on the project and in testing the technology. “They want a quick reading. And the wish list for the mining industry is also that it can be connected to Wi-Fi or LTE.” The RBS technology was validated at CanmetMINING’s laboratories to confirm the reading of the sensors with standardized testing methods.

As the NRC team worked with CanmetMINING to develop the technology application for ground control, Quenneville began to build a consortium of interested mining companies to field test the RBS.

With no moving parts or wires, Quenneville said the NRC believes the sensors could last up to ten years. The miniature ultrasonic sensor is permanently installed on a standard solid rebar. The only adjustment to the rebar is a blunt end and two small holes drilled into it that are used as markers to divide it into three sections.

“The markers rebound the signal from the sensor, which allows it to not just look at the whole bolt, but also the three sections,” said Quenneville. That transforms the readings from the sensors into valuable data to better understand what is happening in the rock mass. The technology can identify where in the bolt plastic deformation is occurring due to an excessive load. In other words, it can detect where the metal rebar is being thinned out by the weight before it breaks. This in turn makes it possible to more precisely rehabilitate before failures occur.

The NRC system is also flexible. Each sensor has an RFID tag that is permanently affixed to the exposed end of an installed rock bolt. The sensors can be connected with a removable cap to a real-time multiplex recorder. Alternatively, to get a quick manual reading, an operator simply has to touch the sensor with a telescopic perch connected to a manual recorder. The multiplex recorder can be relocated to other areas in the mine to accommodate other sensors.

“If you come back years later, you can put the cap on and the sensors can still be read. You can then see what happened since the last time you took a reading,” said Quenneville.

And, as requested, it can connect to Wi-Fi or LTE, which opens up the possibility of integrating the system’s real-time data with other technology, including seismic monitoring.

When Quenneville approached Agnico Eagle about the new rock bolt sensors, its engineers immediately saw the potential. “We have a deep mine so, for us, seismicity is a challenge,” said Philippe Morissette, a rock mechanics engineer with the mining company. “Being able to monitor micro-seismic events and the degradation of our support systems, that’s something very interesting for us.”

Because the technology is affordable, it allows mines to monitor far larger areas. “It provides us with the opportunity to link what we see in the area we have inspected and the actual deformation of the bolts or if some bolts have collapsed,” said Morissette. “This could provide a more accurate picture of the situation.”

For now, the technology will continue to undergo testing and refining but once that is complete, Anderson said she believes it can be taken to market in less than 18 months. Meanwhile, the NRC has big plans for the patent-pending technology.

“We are talking with many companies at this point,” said Quenneville. “At the same time, we have various applications in the works. This is just the first generation of the technology.”

One possibility is to integrate the rock bolt data with micro-seismic and LIDAR monitoring technology.

“If we link this together, the planning people will be able to better understand where the stress is moving and how the ground support systems are reacting,” said Lacroix. “These sensors give that extra ability to begin to connect all the dots and put them together.”