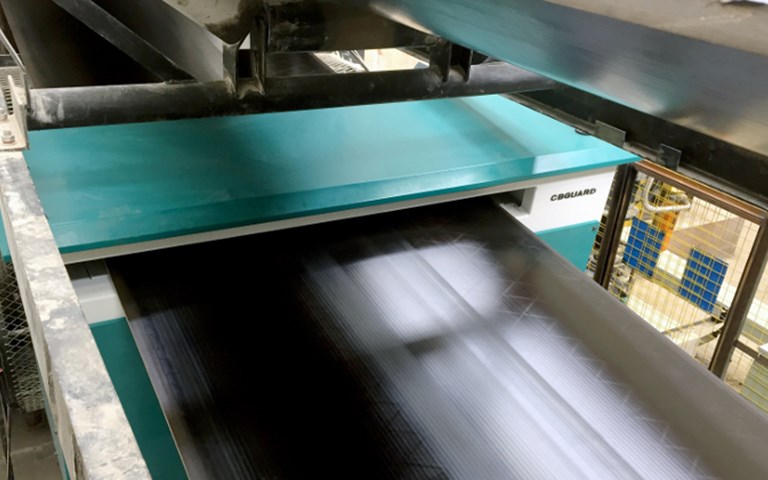 The monitoring technology of the CBGuard system generates a constant video feed of a scan that penetrates the conveyor belt and notifies the operator of problems. Courtesy of Conveyor Belt Gateway

How ore journeys from mine to mill through unglamorous bins, chutes and conveyors is no less important for improving efficiencies and productivity than the ore’s highly instrumented and automated destination. Bulk material handling experts point out that as more miners invest in automation and the optimization of big-ticket equipment, it becomes more critical to pay attention to the design and maintenance of transfer and storage systems to ensure a predictable and reliable feed to the mill. There is good news, with new technologies making it possible for mining companies to monitor their equipment in real time to reduce downtime and maintenance costs. And there is also increasingly herculean computational power that is enabling a 40-year-old technique, discrete element method (DEM) analysis, to be a much faster and accurate design for both new and existing material handling systems.

There is a disconnect

“Something that one of my clients once said really resonated with me,” said Martin Esaki, vice-president of bulk material engineering firm Jenike & Johanson in Toronto. “He said, ‘People look at the process flow diagrams and tend to underestimate the importance of the lines connecting the multimillion dollar components such as the crusher, kilns and mills. The lines represent mundane items such as belt conveyors or transfer chutes. These, however, when poorly designed, can cripple a plant.’ I’ve spent a lot of time fixing designed-in problems such as plugged or worn out chutes, belt wear and underpowered equipment.”

Miners must complement technology with design. For example, operations can optimize their conveyor belts to run at higher speeds in order to feed their state-of-the-art mills, but design flaws in chutes and hoppers can quickly cancel out that work. “If flow problems result in an upstream chute or hopper operating at a lower rate or at its design rate only for a fraction of the time, the system’s throughput rate will be limited, even if the belt is optimized to handle much higher rates” said Tracy Holmes, president at Jenike & Johanson.

Lou Bruno, executive director of central Canada operations at BBA, notes a further issue. When equipment downstream has been automated and optimized, he said, “and you speed up the discharge from the bin to get more material, all of a sudden you can get a big avalanche of ore because the bin doesn’t operate in a predictable flow pattern.”

“Even in this digital age, the laws of physics are not negotiable,” said Bruno. “There is only so much instrumentation can do to improve a bad situation if the understanding of the physics were wrong to begin with,” he said. “When your mechanical design is good, you can do a lot of good things with instrumentation. But when the mechanical design is deficient, you are limiting the benefits of what you can do with automation.”

The mechanics of flow

“The most common mechanical problems related to bulk material handling these days can be traced to improperly designed bins and chutes. A lot of people don’t understand how to design them,” Bruno said. “As a result they don’t flow properly, predictably and reliably. And if the bin stops flowing then the whole mill doesn’t get enough material, and that’s a big problem.”

Related: Faster sensors have upped the potential for ore sorting in mine operations

Many older operations use funnel flow bins, which have flatter bottoms than newer steeper-sloped mass flow bins, and tend to result in material segregation, in which the coarser material flows down to the edges and the finer material collects in the centre. The resulting particle size distribution to the mill will be highly variable in a funnel flow pattern and this could upset a “finely tuned” mill operation, Bruno explained. A funnel flow pattern can also lead to the formation of an interlocking arch – or bridge – that results in a complete blockage and thus considerable downtime. “Sometimes you spend days trying to clear an arch,” he said.

Another issue with a funnel flow pattern of a cohesive ore in a bin is the formation of what is known as a stable rathole, which can starve a mill of feed. “It’s like a big open pipe that goes all the way up the bin,” said Bruno. “All you may get is the material going through the rathole as a chute, therefore losing many tonnes of live capacity in the bin. A mass flow or expanded flow design would avoid problems associated with flow interruptions and material segregation, and would maximize the benefits of automation.”

According to Bruno, similar problems also occur with stockpiles and hoppers. “Properly designed withdrawal mass flow hoppers and feeders, strategically placed under the pile, can eliminate the formation of stable ratholes or stable arches and expand the flow pattern to maximize live storage capacity of the stockpile,” he said.

Design problems also occur with chutes, and material flow properties and characterization can be used for mathematical modelling to select the right angle, lining and shape of the chute so the bulk material will flow reliably and predictably.

DEM has been around since the 1970s but it is only in the last decade that the software modelling technology has come to be widely used by engineers to model and understand complex bulk material behaviour. That is thanks to the dramatic explosion in today’s computational power. “We can now model bigger and more complicated systems,” said Andrew Grima, a senior design engineer at Bulk Materials Engineering Australia at the University of Wollongong, which partners with U.K.-based DEM Solutions.

Esaki from Jenike & Johanson, which has developed its own DEM software, explains the complexity of the technology. “With DEM you are trying to mimic the behaviour of real-world bulk material, which in general consists of billions and billions of minute particles interacting with each other through complex forces, using a limited number of ‘large’ particles interacting through simplified contact force models. You try to mathematically formulate simplified interaction force models, at a macroscopic level, to best duplicate the behaviour of real bulk material consisting of microscopic particles governed by complex interaction forces that are sometimes only relevant at a microscopic level.”

The analysis offers insight into potential designs, even if the flows of material are complex, said Grima. It also lets engineers compare how the material will behave in different scenarios, and, he added, it “allows engineers to be proactive about getting things right the first time with no surprises.” The end result is more reliable operations. According to Holmes, it also means that “a whole new class of problems – the ones involving moving mechanical equipment such as bucket wheel reclaimers or rail car dumpers – can now be approached in a much more scientific way, instead of relying mainly on guesswork, experience or who can be most convincing.”

A before and after depiction of a transfer chute redesigned using DEM. Courtesy of Bulk Materials Engineering Australia

The technology is a powerful tool that replaces scale modelling and the many assumptions it requires engineers to make when designing conveyor systems and transfer points. “When we do this in the DEM 3D environment the amount of information you can extract from these systems is extensive,” said Grima. “It provides a lot more insights for engineers. Working on a desktop, you can make modifications easily. When we’re modifying transfer systems we can identify potential problems and try to find the best solution and validate it by DEM before we go and manufacture and implement these design changes.”

There is one caveat: the software requires material flow characteristics tests and calibration with actual material from the site to do its job well, something that was not always done in the past. “The DEM software will run based on whatever you give it,” said Holmes. “So it’s very important that you calibrate with real-world material.”

Better-designed and calibrated bins, chutes and conveyor systems will help reduce unnecessary wear on the conveyor belt and lengthen the life of the belts. But even under ideal conditions, things can go wrong. The costs can run in the hundreds of thousands of dollars per hour during an unforeseen shutdown. That is why much attention has been put into innovations to help monitor conveyor health and allow for early detection of problems. Emerson, for example, has developed technology that monitors such critical conveyor components as drives, pulleys and bearings in real time.

Phoenix Extreme Conveyor Belt Solutions has created a suite of belt monitoring systems, including its more recent addition Phoenoguard PX system. Permanently installed on the lower run of the belt, the system scans the surface, detecting everything from incremental damage, including rips and splice integrity, to cover rubber damage and belt alignment. It also detects cable damage using magnetic imaging technology. “The cables are the strength,” said Brad Baber, sales manager with Phoenix. “They’re what convey the material, so you want to do whatever you can to protect the cables from any damage. If there’s a cable missing or broken, the system will actually pick it up.”

CBG Conveyor Belt Gateway in Germany is offering the CBGuard system, which monitors conveyor belts and generates a constant video feed. “At any point in time, you know exactly the condition of every component in your belt,” said Bernd Küsel, the company’s president.

There are two incidents in which the system will automatically stop the conveyor: if it detects that a splice is opening or the belt is being ripped. “Otherwise, whenever there is something above a certain threshold, the system will notify the user by a multimedia messaging service notification,” said Küsel.

The user can then review the video and zoom in on the image of the problem area to examine a highly detailed photograph of that point.

Not only does the system eliminate the need for shutting down the belt for visual inspections – and catch all the components beneath the surface that such inspections can miss – it also means “you can let your belt run to its real limit, when the belt is genuinely worn out,” said Küsel. “Many users don’t realize they replace the belts much too early because they can’t take any risk in something going wrong, even though the belt might be fine.”

The system also stores all the scanned video data, something that appealed to one original equipment manufacturer who is using it to research patterns to improve their systems – and could potentially be employed by mining operations to do the same.

Today’s tools to improve material handling performance are more powerful than ever. However, when each way station, transfer point and conveyer along the line has its own unique constraints, one solution alone may not be enough to keep things moving smoothly. A steady flow of material is a careful blend of design and technology.