On the frontline of the push for gender equity in miningOver a decades-long career, Barbara Caelles advocated for gender equity and developed strong networks for women in British Columbia’s mining industry. Part of our We Are Mining series

Over a decades-long career, Barbara Caelles advocated for gender equity and developed strong networks for women in British Columbia’s mining industry. Part of our We Are Mining series
By Kylie Williams
December 18, 2018 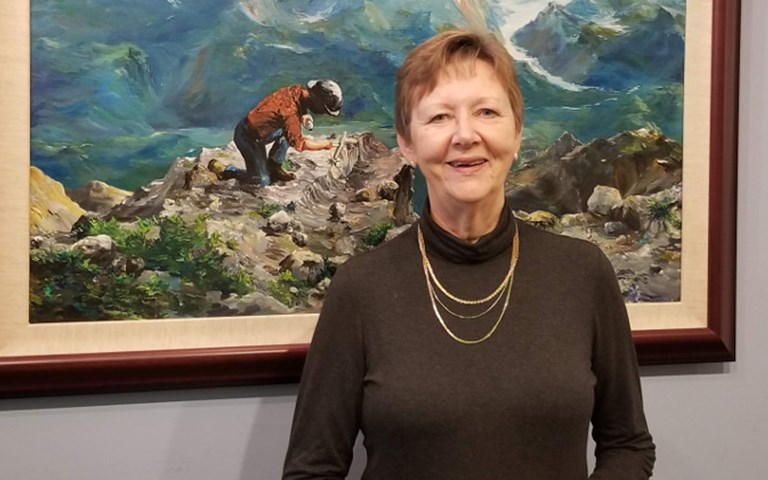 "There is still a long way to go toward equality" in mining, said Barbara Caelles, who has worked in British Columbia's mining industry since the 1970s. Kylie Williams

As a young exploration geologist in 1970, Barbara Caelles walked out on her first job when her manager told her there were simply “no facilities” to send a woman out in the field, as she had been promised a year earlier.

“I stood up and said, ‘Well, thank you. I don’t want an office job,’ and walked out,” Caelles recalled. “It was a catch-22. We all felt that you couldn’t be a geologist unless you had field experience, but fieldwork for women was more difficult to find. [Men] had no problems finding it.”

She was able to find another job the same day with a company that sent her to California where she began to build her field experience. She returned to Vancouver and spent the next decade as one of only a handful of women field geologists. She worked on a number of large field programs, including Hackett River and the Back River area in Nunavut, and numerous projects throughout British Columbia and the Northwest Territories. She also wrote and co-authored several scientific papers.

With quiet determination, Caelles was able to overcome early experiences of sexism in the 1970s, when women geologists were considered a curiosity. Even returning to work part-time in the ‘80s and ‘90s after having her two children, she carved out a role in records management with her supervisors that allowed her great flexibility.

“It was when I came back full-time in 1999 that I realized…the more things change the more they stay the same,” said Caelles.

The inflexible work schedules, blatant sexism and unconscious bias she witnessed across the industry spurred her on to become a strong advocate for gender equity in mining. Caelles spent most of the next two decades working behind the scenes to build strong networks for women from all areas of the mining industry and co-founded the first Women in Mining group in Vancouver.

Caelles decided to become a geologist after a conversation with a (male) geophysicist while on a group climbing trip, shortly after she graduated from high school. She was the only female in her 36-person University of British Columbia graduating class of 1970. In 1975, she was featured in The Northern Miner as one of the six female geologists Cominco had on staff that year, a celebrated improvement over the sole woman geologist employed by them 10 years earlier.

Caelles’ career took “a sharp righthand turn” in 1980 when she had her first child. Although Cominco, where she had worked for several years before her children were born, offered Caelles her field job back when she returned to work, she could not imagine leaving her children with a nanny to work on large field programs where geologists were expected to be away for four or five months each year.

“I always thought the opportunity would present itself where I could take my kids and go in the field, but it didn’t,” said Caelles. “So, they offered me a part-time job in the office to put together an index of all their properties.”

Caelles had previous experience with records management, having worked for a while at McDonald Consultants earlier in her career. There, she contributed to the original McDonald Cards, an index of all the mineral properties in B.C., which evolved into BC Minfile, a database that today contains almost 15,000 records and is still used by explorers interested in B.C.

“I had made a lot of friends in the industry who weren’t necessarily geologists or engineers, who were just as passionate as I was, but they were lawyers, or they were PR people. They loved mining. It was their life,” said Caelles.

In the late 1990s, Sue Wilson, president of the Greater Vancouver Mining Women’s Association and wife of Placer Dome president and CEO John Wilson, asked Caelles to help her invite women geoscientists to a networking event for women and female geology students, the first of its type in Vancouver. Caelles helped attract more professional women to the event over the first few years and had a sudden realization.

“This lightbulb went off,” said Caelles. “These women were ecstatic to be able to be in one room, all professional women. Yes, we were talking to students, but we really enjoyed talking among ourselves.”

In 2002, a chance conversation between Caelles and colleague, Diane Gregory, led to the formation of the Women in Mining Vancouver group. It began as a simple email list between Caelles, Gregory and a few colleagues. There were 20 people at the first meeting, and within a year, there were more than 100 people on the list. The group became WIM British Columbia (WIMBC) in 2014 and continues to hold monthly lunch and learns, evening social events, charity initiatives and partnerships with other mining affiliated organizations. Today, the membership is around 1,200 people and Caelles, who is now retired, sits on the board of directors.

“I know many women have gotten jobs because of connections they’ve made in our organization,” said Caelles.

Related: Materials engineer Marilyn Spink doesn't like the lack of diversity in mining and she is set on change

Despite her preference for working behind the scenes, Caelles is well-known and respected throughout the mineral exploration and mining community in Vancouver for her leadership and commitment to connecting and empowering women. Caelles was recognized for her work in 2010 when she was awarded the Minerva Foundation’s Women in Natural Resources Award for Philanthropy and Volunteerism, and again in 2016 when she was recognized with the Frank Woodside Past Presidents and Past Chairs Award for her distinguished service to the Association of Mineral Exploration B.C.

Andrea Cade, vice-president of WIMBC, has known and volunteered alongside Caelles for more than 10 years. Cade said it is difficult to measure the true reach and influence Caelles’ volunteer efforts have had.

“At various stages throughout my career in exploration geology and mine studies, I have turned to Barbara for guidance,” said Cade. “She has built an incredible network of people to turn to but her own personal experiences have been important to me. For many of us associated with WIMBC, she is the heartbeat of the organization. We continue to rely on her vision as we grow and move forward.”

Caelles notes that women in the mining industry need each other in a slightly different way today than when she was a young mother returning to work in the ‘80s and looking for a network. Rather than trying to fit into a men’s industry, as it was when she graduated, women today are trying to find their place as equals and be themselves.

“There’s so many women now that are working and are very quiet about the way they do things,” said Caelles, “and yet are very confident and articulate.”

Kendra Johnston, president at Independence Gold Corp, is one such example, Caelles said. Johnston was invited to speak at the October lunch and learn event organized by WIMBC on her experience as a mid-career professional in mineral exploration.

“These events are so valuable to share our experiences and hear perspectives from all aspects of our business and people at different stages in their careers,” said Johnston. “Barbara’s dedication to our industry and the work she has done over many years through WIMBC has played an important role in supporting future generations of women – and men – in exploration and mining.”

Caelles is surprised with the pace of change for women in mining and exploration. Despite the incremental changes she has witnessed over the last 50 years, she still finds that the conversations at networking events tend to revolve around the difficulty of finding a job, blatant and unconscious bias, and the challenges of finding a role within the industry that is flexible enough to fit into life as a parent with a growing family, or as one half of a dual-career couple.

“Safety is probably the biggest change in the industry since I graduated. Camp life is so different: they have emergency response plans, personal safety gear, hot showers and internet; where we had a rifle, a hooked-up barrel and a radio,” said Caelles. “But there is still a long way to go toward equality. It’s not just about the numbers, those are increasing slowly, but about treating each other with respect and assessing a person’s competency based on skill and experience, rather than making assumptions based on age or gender.”