Wall, a staunch opponent of federal carbon pricing plan, announces he will step down from leadership
By Elle Crosby
August 11, 2017 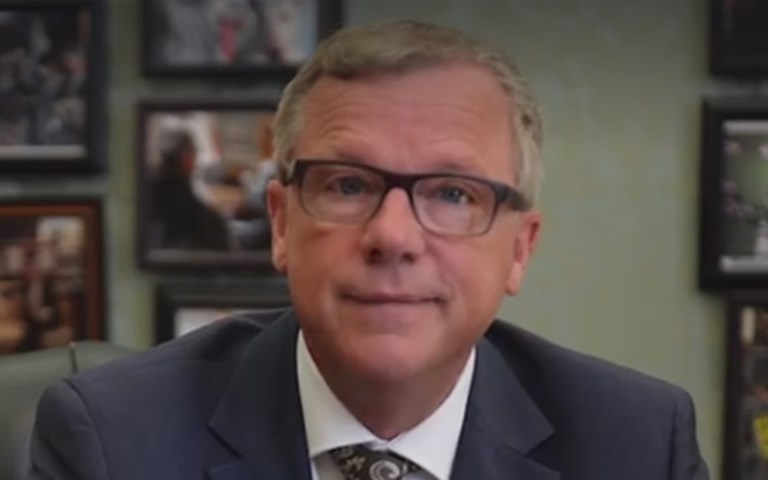 Wall was first elected premier of Saskatchewan in 2017, and was re-elected in 2011 and 2016. Screencap from Facebook/Brad Wall

Saskatchewan Premier Brad Wall will end his political career when the Saskatchewan Party is able to find a new leader, he announced in a video posted to Facebook on August 10.

In the video, Wall said he and his wife decided that, after ten years as premier, it was “time for renewal – for my party, for the government and for the province.”

Under his leadership, the Saskatchewan Party’s agenda has focused heavily on economic development, including introducing tax credits in 2015 to bring more corporate head office jobs to the province.

A supporter of Saskatchewan’s potash and uranium mining industries – the province is the world’s largest potash producer and second largest uranium producer – he has been vocal in the past about developments, and in particular job losses, in both sectors.

Last year he announced his support for the merger between PotashCorp and Agrium after speaking with both companies’ CEOs. “We would want to see Sask’s interests protected and furthered,” he told reporters at the provincial legislature last August. “We would view this potentially, if it were to come to fruition, as an opportunity to perhaps pursue an even greater corporate presence in Saskatchewan on behalf of the new merged entity.”

He also responded to the loss of 500 jobs at Cameco’s Rabbit Lake uranium mine in April 2016, calling it a “terrible day for northern Saskatchewan.”

Saskatchewan has consistently ranked a top mining jurisdiction in Canada and in the world according to the Fraser Institute’s Survey of Mining Companies, with the province coming in first worldwide in 2016 and second in 2015.

Over the past year, Wall was a vocal challenger to the federal Liberals’ carbon pricing plan, which is being enacted to lower greenhouse gas emissions and help the country reach its Paris Agreement commitment to reduce carbon emissions by 30 per cent below 2005 levels by 2030.

Wall asserted that a carbon tax will negatively impact Saskatchewan’s agriculture, energy and mining sectors and threatened to pursue legal action, including a possible constitutional challenge, if the province was forced to adopt a carbon pricing plan.

When releasing the plan, Environment Minister Catherine McKenna said she hopes “Saskatchewan will develop a plan that works best for Saskatchewan,” but added that “it is well within the federal government’s right to take action to protect the environment.”