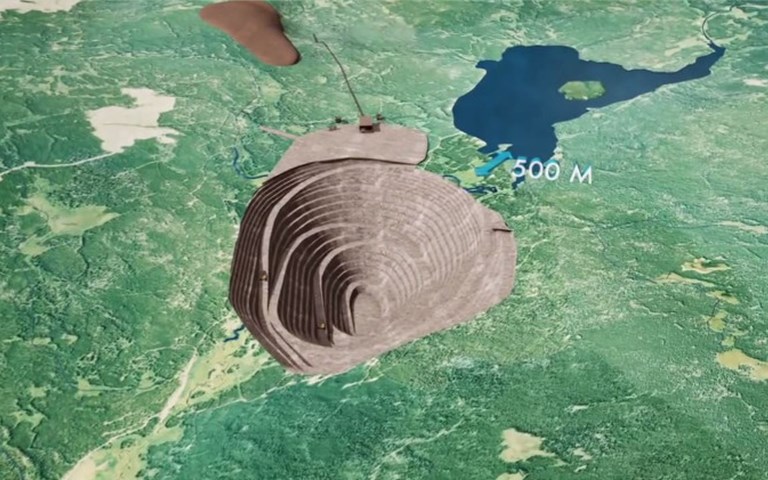 In the fourth phase of New Prosperity, the rim of the pit would be 500 metres away from Fish Lake, or Teztan Biny, according to Taseko. Screencap via Taseko Mines video.

The federal environment ministry filed a request for a permanent injunction to stop Taseko Mines from carrying out a drilling program at its New Prosperity project.

The government’s request follows another injunction request filed by the Tsilhqot’in National Government two weeks ago to stop Taseko’s work at the site pending the outcomes of a petition and a civil claim.

Both filings are seeking to quash Taseko’s multi-year permit to conduct exploratory work at New Prosperity, including test pits, drill holes and monitoring wells, which the provincial government granted the company in mid-July.

After Taseko received the permit, the Canadian Environmental Assessment Agency warned the company in a July 28 letter that any work on the site would violate Sections 5 and 6 of the Act, the same sections under which New Prosperity was rejected by the agency in 2014, and that “enforcement action may be taken should Taseko Mines Limited not comply with the requirements of [the Act].”

Sections 5 and 6 of CEAA 2012 say a project proponent may not carry out any part of their project “if that act or thing may cause an environmental effect” to federal lands, fish, aquatic species and bird habitats, and Indigenous Peoples’ health and socioeconomic conditions, physical and cultural heritage, and use of land and resources for traditional purposes.

A ruling on the Tsilhqot’in’s injunction request was expected on Monday, but it was withheld due to the federal government’s intervention, and because the company promised not to proceed with its drilling program at this time.

“We commend the federal government for demonstrating the leadership to enforce its environmental laws and to help us ensure that Taseko cannot continue to tear up a very special place to our people,” said Xeni Gwet’in Chief Roger William in a news release, “all for a project that has been rejected and cannot be built.”

The Nation said it "looks forward to the full hearing of its legal challenges to this provincial approval," and may, if necessary, return to court to seek a decision on the injunction in the future.

New Prosperity, located 125 kilometres southwest of Williams Lake, falls within an area the Nation does not have formal title over but says is part of their traditional territory. The project also contains Fish Lake, or Teztan Biny, which is a sacred location for the Tsilhqot’in. The Nation has specifically objected to any drilling work being done near the lake.

The copper-gold project has been rejected by the agency twice due to environmental concerns. In 2010, the agency’s panel rejected what was then known as the Prosperity project for its proposed use of Fish Lake for tailings storage. The second review in 2014 rejected a revised project, called New Prosperity, which would avoid the use of Fish Lake, on the grounds that the project would “cause an environmental effect” to Indigenous lands and resources.