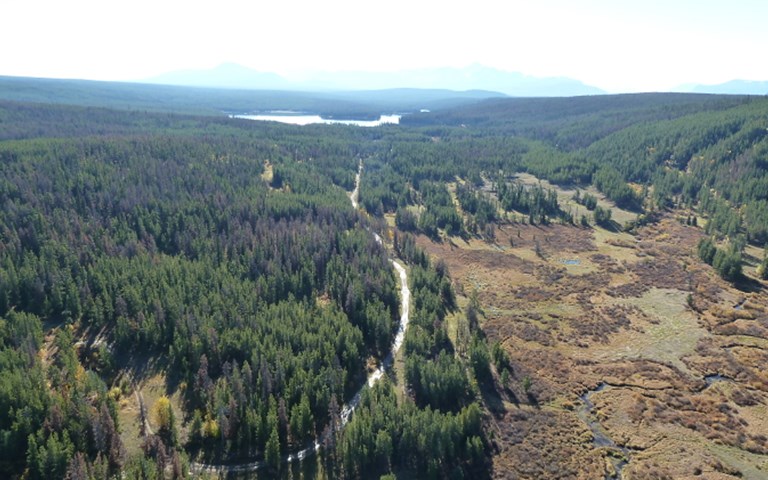 Both the Tsilhqot'in National Government and the Canadian Environmental Assessment Agency have made moves to stop Taseko's work at New Prosperity after the miner received a permit for exploration work from the provincial government in mid-July. Courtesy of Taseko Mines

Taseko Mines’ renewed work at its New Prosperity project is the target of both the Canadian Environmental Assessment Agency and the Tsilhqot’in Nation, whose declared title land is close to the project.

The company received approval from British Columbia in mid-July for a multi-year permit to conduct exploratory work on the site, including test pits, drill holes and monitoring wells.

The Tsilhqot’in National Government asked the B.C. Supreme Court on July 31 for an injunction to stop Taseko’s work, pending the outcomes of both a petition and a civil claim seeking to quash the company’s permits. New Prosperity, located 125 kilometres southwest of Williams Lake, falls within an area the Nation does not have formal title over but says is part of their traditional territory.

A ruling on the injunction is expected on August 14, and Taseko cannot do any work on the site in the meantime.

The Tsilhqot’in’s petition said the permit should be withdrawn because the provincial government breached the duty to consult and accommodate, and the civil claim argued the permit is an “unjustified infringement” on Tsilhqot’in hunting, trapping and fishing rights in the area.

"Why is B.C. even looking at this project?" asked Xeni Gwet'in Chief Roger Williams. "There's a lot of evidence and reasons why there shouldn't be a mine there." Williams also questioned why the permit was issued as the Nation was being evacuated during the wildfires, and was approved in the B.C. Liberal government's final days before the NDP-Green coalition took over.

The injunction request followed a letter sent to the company on July 28 from the CEAA, which said Taseko’s proposed work would violate the sections of the 2012 Canadian Environmental Assessment Act (CEAA) under which the project was rejected in 2014.

“Enforcement action may be taken should Taseko Mines Limited not comply with the requirements of [the Act],” the letter from the agency’s compliance and enforcement unit said.

Sections 5 and 6 of CEAA say a project proponent may not carry out any part of their project “if that act or thing may cause an environmental effect” to federal lands, fish, aquatic species and bird habitats, and Indigenous Peoples’ health and socioeconomic conditions, physical and cultural heritage, and use of land and resources for traditional purposes.

Taseko vice-president of corporate affairs Brian Battison said the company can still go ahead with its exploration work, despite the letter. “Of course we can, that is what the provincial authorization grants,” Battison said, adding that work at the site will resume if judge rules on the injunction in the company’s favour.

In its same-day reply to the agency’s letter, Taseko argued that because the company was only doing exploration work on the site it would not violate the sections, which it asserted pertained only to “construction, operation, decommissioning and abandonment” of a mine.

The company said the agency’s interpretation could lead to “absurd and unconstitutional effects,” like disallowing companies from collecting data for federal and provincial assessments.

Battison said the provincial government was within its rights to issue the work permit, and the federal government is undercutting B.C.’s control over natural resources and property rights.

“The position taken by the government of Canada has potential far-reaching negative implications for mine development in B.C.,” Battison said. “If you can’t explore for minerals without first having an environmental assessment done by Canada, then there will be no mineral exploration.

“You have to go out and gather information in order to submit an environmental assessment.”

The federal government has blocked the copper-gold project twice due to environmental concerns. In 2010, the agency’s panel rejected what was then known as the Prosperity project for its proposed use of Fish Lake for tailings storage. The second review in 2014 rejected a revised project, called New Prosperity, which would avoid the use of Fish Lake, on the grounds that the project would “cause an environmental effect” to Indigenous lands and resources.

Taseko filed requests for two judicial reviews of the 2014 decision, which were heard in federal court in November and concluded in early February. In one of its applications the company brought a constitutional challenge against CEAA, arguing Sections 5 and 6 of the act undercut provincial governments’ authority and discretion.

The company also filed a lawsuit against the federal government in B.C. Supreme Court in February 2016, arguing the government and environment minister “failed to meet the legal duties that were owed to Taseko” when they blocked New Prosperity.