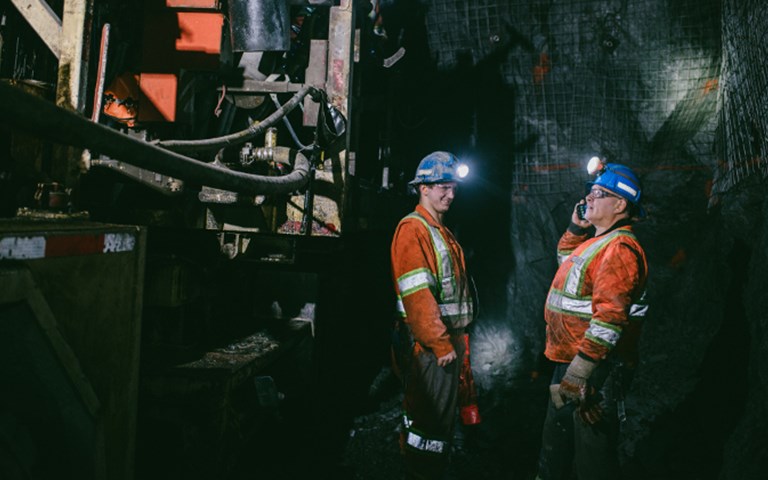 Workers at Agnico Eagle's LaRonde mine are now able to use ruggedized Android phones with LTE capabilities underground. Courtesy of Agnico Eagle

Underground at Agnico Eagle’s LaRonde Zone 5, a satellite deposit of the LaRonde mine, the opening riffs of ACDC’s Thunderstruck punctuated the low din of conversation. Alain Larose, LaRonde’s assistant superintendent of maintenance, grinned. “It’s YouTube!” he said, showing off the screen of his ruggedized smart phone.

Zone 5 and LaRonde itself now have an LTE network that allows workers to make calls, video chat, share data – and even watch YouTube videos – while deep underground. LTE allows for high-speed wireless communication on mobile devices like phones and tablets. The system was piloted at Zone 5 last year and is currently being deployed three kilometres underground at LaRonde, North America’s deepest gold mine.

Ambra Solutions, a Canadian telecommunications engineering company and Ericsson Canada, who worked on the project, said LaRonde has Canada’s deepest underground LTE network. Eric L’Heureux, Ambra’s CEO, said the company is “currently deploying LTE networks in other mines as we speak,” and that by the end of the year there will be multiple mines with the network.

LaRonde has traditionally used a leaky feeder communications system, which has limited coverage in the mine. Christian Goulet, the general mine superintendent at LaRonde, said for places like the ramp and general mine infrastructure the system worked well, but moving into the levels and the mine’s new development areas, coverage dropped to 75 per cent, and to somewhere between zero and 50 per cent, respectively. The average coverage in the mine was about 65 per cent.

“Even though we give a radio to all the workers, normally during the shift I cannot reach them because they’re in working areas,” he said in a presentation to industry and media in Val d’Or last week. “If they are not using a ramp I will not be able to communicate with them.”

The new LTE system was important to be able to reach workers, and could improve safety, he said. 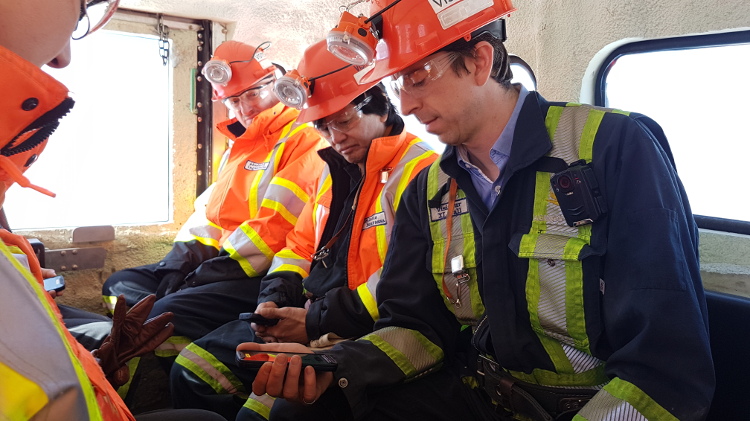 Ambra CEO Eric L'Heureux demonstrates the capabilities of Agnico's LTE network on one of LaRonde's android phones at a March 22 presentation for industry and media. Kelsey Rolfe

Goulet said LTE will be implemented in the mill in the first quarter of 2018, and the full installation underground will be completed in the first half of the year. Some of the potential applications aside from making calls are video conferencing with the on-surface nurse in event of an injury, transferring information from underground equipment and devices, and allowing the engineering team to transfer data from their surveying work.

LaRonde has mined about 87 per cent of its ore, according to Agnico’s website. The mine is expected to last until 2025; mining the low-grade Zone 5 deposit is expected to extend that by a year. The company is currently looking at taking the mine even deeper, from its current 3.1 kilometres below surface to as deep as 3.7 km. In its 2017 financial results Agnico said recent drilling “continues to encounter high grade gold intersections.”

The plan, Goulet said, is to continue to use the leaky feeder system in the operations closer to the surface, where it works well and where mining is almost exhausted, and apply the LTE network in the deeper parts of the mine. “We want to focus on the lower mine as we will go deeper,” he said, “even though it’s many kilometres of cable that we’ll have to install.” About 40 km of cable have already been laid to support the new network.

Goulet said 50 phones with LTE capability are being used underground and 100 phones are at the mills. LaRonde expects to have 300 phones, and between 300 and 500 devices total with the network. The mine is using ruggedized Android phones, but any LTE devices, including iPhones and iPads, could use Agnico’s LTE network. Some phones are shared among workers, but shift bosses will have a designated phone (shared between the day and night shift supervisors) and all the underground equipment have a phone permanently installed.

L’Heureux said LTE is an ideal solution because it is not subject to interference like WiFi, offers better coverage, and can provide coverage to a large area and number of devices. Ambra configured a transfer speed of 30 megabits per second (Mbps) throughout the mine, and L’Heureux said LTE technology can allow for wireless transfer speeds of up to one gigabit per second. It is also secure – Agnico can decide who is able to use the network, and all devices that are being used underground have special SIM cards to give them access.

He added that with LTE, the manager of the network can send “warning messages to all users in a specific area. You can use it in the mine to warn for evacuation, or if gas has been detected.”

L’Heureux said LaRonde is currently testing location tracking. Bluetooth beacons located every 50 metres throughout mine tunnels would ping off Bluetooth readers on, for example, worker helmets, phones, or on vehicles, which would allow supervisors to locate workers. “Underground, tracking is important,” L’Heureux said. “People want to know where the workers are, and where the trucks are.”

In addition to tracking, Goulet said the LTE network gives the mine the potential for equipment to have autonomous capabilities later on.

Goulet said LaRonde has an LTE committee that meets once a month to consider future applications of the technology, including developing sensors for gas monitoring.