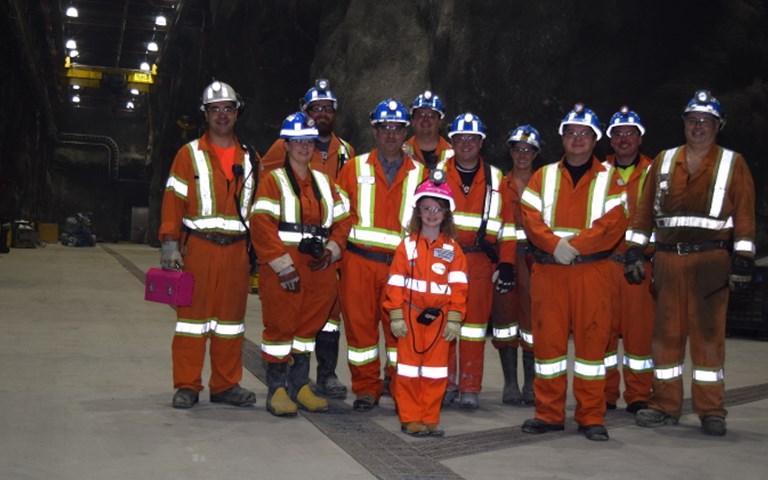 Aliesha with miners at Goldcorp's Hoyle Pond underground mine. Courtesy of Goldcorp

At Goldcorp’s Porcupine Gold Mines in Timmins, it is company practice to call out “fire in the hole” in the 90 seconds before a blast is detonated. But last week the mine manager allowed an exception to the rule for eight-year-old Aliesha, whose enthusiastic cry of “dynamite!” went out over the radio at the Hollinger open-pit mine in the seconds before the blast went off.

Aliesha visited Hollinger, Dome and Hoyle Pond in Timmins last week thanks to the Toronto and Central Ontario Make-A-Wish Foundation. The foundation asked her for three wishes, and her first pick was to visit a mine.

“That’s the one thing everyone’s blown away by,” said her father Dave. The family’s surname is not being published for reasons of privacy. “It’s been a little over three years now that she’s been fully obsessed with mining. The school projects that she does, somehow she makes them revolve around mining.”

Dave said Aliesha is fascinated by science and loves collecting shiny rocks, and has a toy at home that allows her to grow her own crystals.

Related: The Dome mine near Timmins, Ontario has been a fixture on the Canadian mining scene for over a century. At the end of December 2017 its miners worked their last shift

Aliesha was diagnosed at age four with epilepsy and suffers from regular seizures. She regularly goes to the Hospital for Sick Children in Toronto for check-in appointments. She also has a severe apraxia of speech, and uses a portable speech device to help her talk.

Mining company Sherritt International sponsored Aliesha’s wish, and Goldcorp was asked to be the wish grantor – making it the first time a mining company has ever granted a wish for the foundation.

Bryan Neeley, Goldcorp’s sustainability manager for Porcupine Gold Mines, said the company got the call from Make-A-Wish about a month ago. “When we heard about the initiative and brought it up to our mine general manager, there was no way we weren’t going to make this happen,” he said.

Aliesha’s day started with a limo ride from her family’s Bowmanville home to the Toronto airport for a flight to Timmins. She and her mother, Tiffany, went underground at Hoyle Pond, getting to use the cage elevator and take a trolley ride through the mine tunnels.

Dave and Aliesha’s four-year-old sister Abigail joined them at Hollinger for lunch and the girls got bags of gifts, including gem kits and a Lego mining set.

In the afternoon, Aliesha went with Lindsay Martin, a Hollinger employee, for an hour-long ride around the mine in a haul truck to pick up and deposit ore. Then came the big finale.

“Getting to detonate the [blast], that was probably the top of her day,” Dave said. 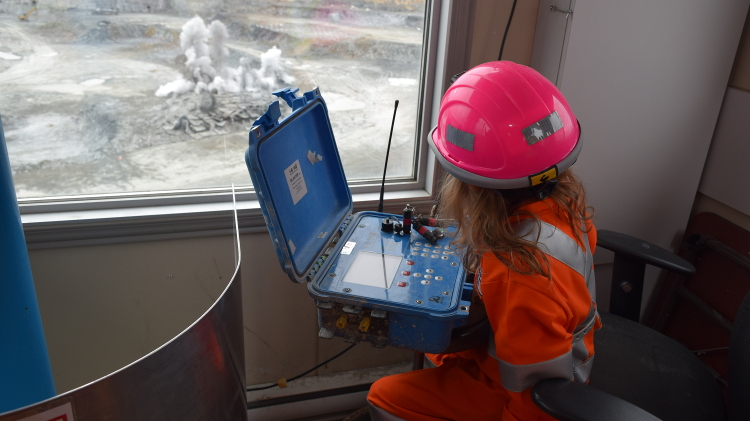 Aliesha detonates a blast at Goldcorp's Hollinger mine. Courtesy of Goldcorp

Aliesha and Abigail were both outfitted with child-sized coveralls that were made by Sudbury, Ontario-based Covergalls and embroidered with their names. Founder Alicia Woods said she got a call from Make-A-Wish in the late summer. “They’d never worked on a wish like this before, so they weren’t sure where to start,” she said.

Woods said Covergalls has been making mini coveralls for kids as part of its work with Dynamic Earth in Sudbury, and just needed to know what mine they were visiting so they could apply the right stripes to meet provincial regulations.

“To be able to participate in granting [Aliesha’s] wish was exciting for us,” she said. “I’ve never seen anybody more excited about the mining industry than her.”

For safety reasons, Neeley said Goldcorp arranged to have two local paramedics on site all day.

He said making the day happen brought the whole mine community together. “It was heartwarming, once people knew what we were doing they wanted to jump in and make sure it was as special as it could be,” he said. “Anyone who interacted with [Aliesha] in the underground mine or at the pit had big smiles, everyone was so proud to be able to be a part of this.”

Dave said his family will remember the day for a long time.

“I can’t even believe all the detail that Goldcorp and everyone else put in,” Dave said. “Everything was just so special.”

If you'd like to contribute to Aliesha's GoFundMe for a new speech device and other medical costs, click here.