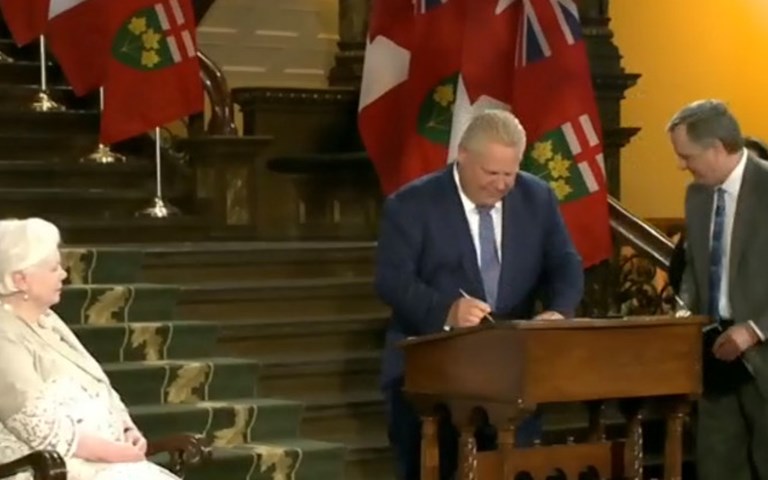 Doug Ford was sworn in as Ontario’s premier on Friday morning with a noticeably smaller cabinet than former-premier Kathleen Wynne’s.

Ford’s Progressive Conservative (PC) government has merged multiple portfolios to reduce the number of ministers to 21, from Wynne’s 28. Seven members of his cabinet are women.

The ministries of energy, northern development and mines, and Indigenous affairs have been combined into one. Greg Rickford, the MPP for Kenora-Rainy River and a former Minister of Natural Resources in Stephen Harper’s Conservative government, will manage the outsized portfolio.

Rickford will be tasked with cutting hydro bills by 12 per cent. Ontario currently has the highest electricity rates in Canada. His mandate will also include establishing resource revenue-sharing systems for northern communities, including Indigenous groups, to ensure they benefit from projects in the region.

Rickford’s portfolio also includes the development of the Ring of Fire chromite deposit.

Related: The competing priorities along the way to development in the Ring of Fire

First-time MPP Rod Phillips, from the riding of Ajax, will head up the environment, conservation and parks ministry – renamed from environment and climate change. Phillips must handle Ford’s most controversial promise, to dismantle Ontario’s carbon cap-and-trade system.

Ford has additionally promised to take the federal government to court to prevent it from imposing its carbon pricing backstop on the province. But an independent legal opinion written for Manitoba, which is also currently considering a similar lawsuit, indicates that Ontario would likely lose that fight. Winnipeg lawyer Bryan Schwartz wrote in October that the Supreme Court of Canada would most likely uphold the carbon pricing plan based on the federal government’s broad taxation powers.

Jeff Yurek, the MPP for Elgin-Middlesex-London, was named the natural resources and forestry ministry, which handles, among other things, oil, gas, salt and aggregate resources, and renewable energy projects.