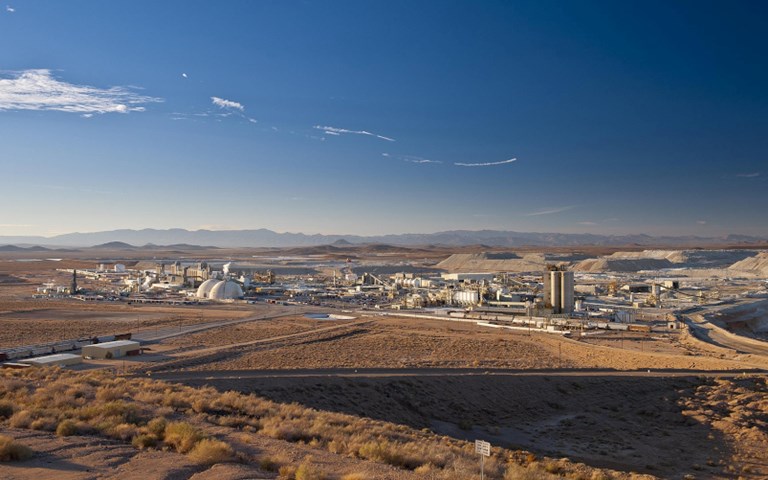 Rio Tinto has the capacity to produce up to 10 tonnes of battery-grade lithium per year from waste rock at its Boron mine site in California, and is exploring expanding to 5,000 tonnes annually. Courtesy of Rio Tinto.

Welcome back to your weekly mining news recap, where we catch you up on some of the news you may have missed. This week’s headlines include risk mitigation for underground seismicity, updated tailings standards and lithium production from mining waste piles.

Osisko Mining has released an updated preliminary economic assessment for its Windfall project, which the company says could be a “highly profitable new gold mine in Quebec.” The mine is expected to produce an average of 238,000 ounces of gold per year over an 18-year life of mine at an all-in sustaining cost of US$610 per ounce. Osisko says it will complete a definitive feasibility study this fall, with the goal of first production in 2024.

Barrick announced that it has reached an agreement with the Papua New Guinea government to resume operations at the Porgera gold mine after the government refused to renew its mining lease in April 2020. Under the new agreement, the mine will be held by a new joint venture with a 51 per cent majority stake owned by Papua New Guinean stakeholders, and the rest by Barrick. The state will also have the option to purchase Barrick’s stake in the mine after 10 years.

Mines are getting deeper, and with that brings increased frequency of seismic events and ground control challenges that can cause safety issues or work delays. Sandra V.L. Smith explains how companies that can identify risks, communicate changes and revise the mine designs will be able to more effectively keep people safe and avoid delays. Removing workers from risk exposure, designing seismic events into the engineering and hazard awareness training are some of the methods companies can use to reduce seismic risk.

Turquoise Hill and Rio Tinto have come to an agreement regarding an updated funding plan for the Oyu Tolgoi mine in Mongolia. Funding for the mine became an issue after underground stability risks forced Turquoise Hill to increase capital costs for its expansion project by US$1.45 billion over its original price tag, leading to conflict with Rio Tinto as well as the Mongolian government over the project’s benefits. The new agreement will seek to reprofile the project debt to better align with the project’s timeline and raise up to US$500 million through a public offering of Turquoise Hill shares.

The Mining Association of Canada (MAC) has updated its Towards Sustainable Mining (TSM) standard, focusing on responsible tailings management. Following the release of the Global Industry Standard on Tailings Management last year, MAC looked to improve TSM’s requirements to align with the global standard and is expanding the TSM tailings management protocol to apply to closed and inactive sites as well. With this MAC says that the TSM standard will meet or exceed most of the requirements from the Global Industry Standard.

Three First Nations in the James Bay lowlands have declared a moratorium on development in the Ring of Fire region in Ontario, alleging that the Impact Assessment Agency of Canada and the province have excluded them from the assessment process for development in the region, as reported by Mining Weekly. The Attawapiskat, Fort Albany and Neskantaga First Nations have lobbied for the assessment to begin once the pandemic ended but are claiming that the process had already begun over the past year without them having been notified. The Ring of Fire region hosts significant discoveries of critical minerals and has been a focus for development for Ontario.

An area of ecological and cultural importance to the Tahltan Nation on the slopes of Mount Edziza in British Columbia is now permanently protected from development, thanks to a collaboration between the province, First Nation, non-profit organizations and a mining company, as reported by Yahoo! News. Skeena Resources, who owned a significant interest in the area, agreed to sell its claims for $5 million, one-fifth of the market value, with the province and NGOs splitting the bill. The land will be protected by the Tahltan Nation as a conservancy, with the B.C. government hoping that this can serve as an example of how industry and Indigenous communities can work together.

Anglo American will be moving on from thermal coal after announcing that it will spin off its South African thermal coal assets into a new business, as reported by Mining.com. The new company will be named Thungela Resources and will hold assets worth approximately $1.3 billion. Anglo American chief executive Mark Cutifani says this is an opportunity for the company to act responsibly in its pursuit of reducing carbon emissions, joining fellow mining giants BHP and Rio Tinto in eliminating thermal coal from its portfolio.

Rio Tinto has commenced production of battery-grade lithium at its Boron mine site in California, using a process that produces high grades of the battery mineral from mine waste rock. The site currently uses a demonstration plant capable of producing 10 tonnes of lithium per year, but the results from the plant will be used to inform a feasibility assessment for a full-scale production plant capable of producing 5,000 tonnes per year, enough to make batteries for 70,000 electric vehicles.