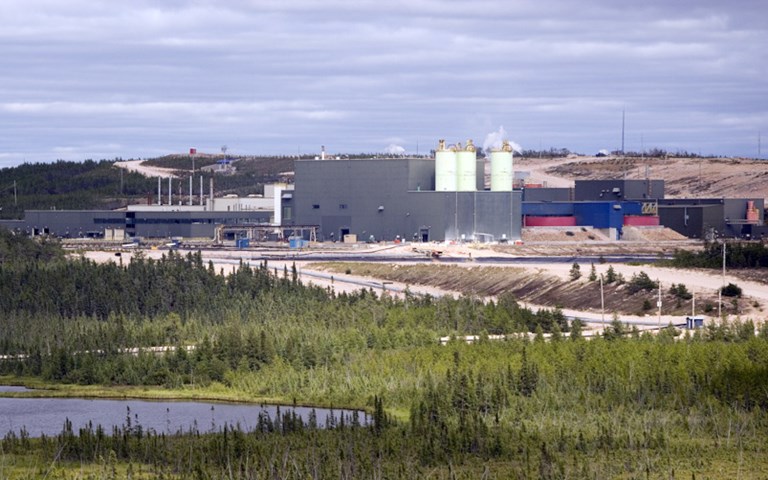 Cameco has produced its first pounds of uranium at its McArthur RIver mine and Key Lake mill (pictured) since they were suspended over four years ago. Courtesy of Cameco.

Welcome back to your weekly mining news recap, where we catch you up on some of the news you may have missed. This week’s headlines include the revival of McArthur River, the Canadian Mining Hall of Fame’s three new members and a major gold-royalties merger.

As the industry continues to shift away from fossil fuels in order to reach net-zero greenhouse gas emissions by 2050, copper plays a crucial role in the technologies needed to accommodate this transition. A recent report shared by S&P Global titled “The Future of Copper” indicates that there may be an issue with filling the supply gap emerging from the increasing need for copper. A gap as large as 9.9 million tonnes could be observed, which accounts for 20 per cent of the copper needed to meet the net-zero goal.

Yamana Gold officially accepted Pan American Silver and Agnico Eagle’s acquisition offer, moving away from Gold Fields’ previous offer of 0.6 shares per Yamana share. The new offer presented to Yamana amounts to US$4.8 billion in combined shares and cash. Although Gold Fields was given five days to present an improved offer, the company refused to budge, ultimately leaving Yamana in the hands of Agnico and Pan American.

The Canadian Mining Hall of Fame (CMHF) introduced three new members for 2023, Jim Cooney, Alexander John Davidson and Douglas Balfour Silver. They will be inducted and recognized for their accomplishments and contributions to the mining industry. The CMHF’s annual gala dinner and ceremony will take place on May 24, 2023 at The Carlu in Toronto.

Cameco produced the first pounds of uranium concentrate at its McArthur River mine and Key Lake mill following the end of its four-year production suspension. The halting of operations in 2018 took place due to “persistent weakness in the global uranium market.” Cameco plans to produce 15 million pounds per year from these operations starting in 2024.

Iamgold is currently searching for funding in order to sustain its Côté project until completion, according to its third-quarter report, as reported by Northern Ontario Business. The report indicated a net loss of $108.3 million for the company and a need for approximately $1 billion to complete the project. Iamgold estimates that the first gold pour and the start production could both happen in early 2024.

Triple Flag Precious Metals Corp. will acquire all of Maverix Metals Inc.’s shares for roughly US$600 million and approximately double the amount of the company’s gold-related assets, as reported by The Financial Post. The merger will result in 29 combined paying assets as well as 228 projects currently in development, with Maverix shareholders having a 23-per cent stake in the company. According to Triple Flag, completion of the merger would make it the fourth-largest streaming and royalties company worldwide.

A shareholder vote on Rio Tinto’s $3.3-billion acquisition of Turquoise Hill Resources has been postponed indefinitely, as reported by Mining.com. The delay follows concerns from Quebec’s top securities regulator, Authorité des machés financiers (AMF), who will be investigating if a side deal between Rio Tinto and shareholders is a legal option. According to Turquoise Hill, AMF believes the deal as constructed “raise[s] public interest concerns.”

Teck Resources is set to power its Chile-based Quebrada Blanca phase 2 copper project with 100-per cent renewable energy beginning in 2025, as reported by Mining.com. Teck Resources will purchase 1,069 gigawatt hours annually of renewable energy from a Chilean utilities company over 17 years. This shift to renewable energy is estimated to reduce the production of roughly 1.6 million tonnes of greenhouse gas emissions per year.

Third-quarter reports have been released for six different companies:

Kinross Gold Corp. recorded US$65.9 million in net earnings for the third quarter, producing 529,155 gold equivalent ounces (GEO) at an all-in sustaining cost (AISC) of US$1,282 per ounce from their current operations. These figures do not include production from assets sold off prior to the end of the quarter.

The third quarter saw Endeavour Mining bring in net earnings US$58 million. The company produced 343,000 gold ounces at an AISC of US$960 per ounce.

Wesdome Gold Mines recorded a net loss of $3.9million, revising its 2022 production guidance down for all its operations. The company produced 22,883 ounces of gold at an AISC of US$1730 per ounce, a 48-per cent increase from the company’s 2021 Q3 report.