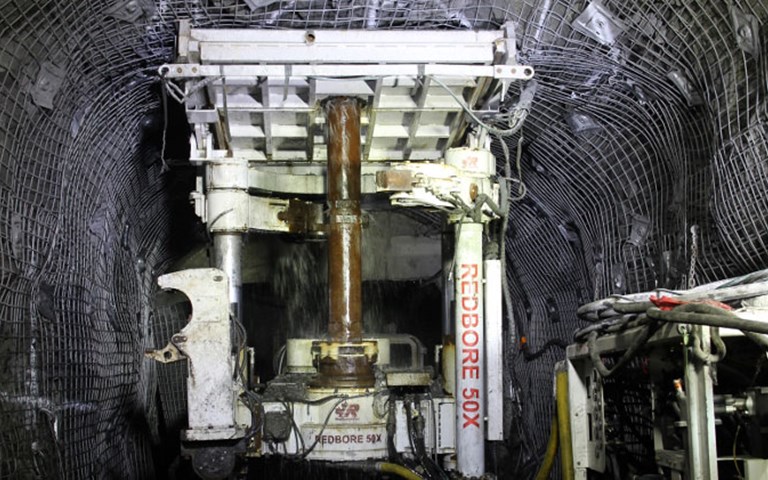 Just because something has always been done one way does not mean that it is necessarily the best way. But keeping the status quo is easy when something works “well enough.” That was the situation that Frank Poole found when he took over PT Freeport Indonesia’s Deep Mill Level Zone (DMLZ) mine in 2013.

Poole, the senior manager of development and construction, came to the DMLZ while the block cave operation was at the early stages of core development. The mine was built on the decades of experience Freeport had already gained in the copper and gold-rich Grasberg minerals district of Indonesia. But the fresh perspective Poole brought from a long career in the Australian hard rock mining industry allowed him to see potential areas for improvement. One area in particular stood out: the excavation of drawbell slot raises.

Excavation of drawbell slots at the DMLZ, like at Freeport’s other Indonesian mines, is the domain of PT Redpath Indonesia (PTRI). Redpath has been on site at Freeport’s various Indonesian mines – all located at its Grasberg property – for over 30 years, and has a presence of over 1,200 workers in that country, responsible for tasks including mine development, raisebore work and maintenance at Freeport’s operations.

Redpath also operates the mechanized raise climber (MRC) group at Freeport. The MRC, or Alimak, method has been used to develop drawbell slot raises (and other work) at other Freeport mines for years, including at the Deep Ore Zone (DOZ) mine since around 1999.

In MRC, a rack and pinion type climber equipped with a work staging area, safety canopy and man basket runs up sections of guide rails into a raise. The man basket, which is fastened on the lower end of the MRC unit, carries two or three workers up the raise to the active face where they then move to the unit’s work staging area, which contains the drilling and blasting equipment needed to advance the raise. After each stage of blasting, additional lengths of guide rail are installed and secured on the hanging wall so the MRC can climb higher. At Freeport, the Alimak units operate from a custom portable nest, which reduces and simplifies setup time in each drawbell slot from days to just hours.

“The MRC has worked for well over 15 years, with a great level of success,” said Nicky Herault, an operations director with PTRI. Both the Alimak units and the trained workforce of Indonesian nationals were readily available at the site, so as the DMLZ was developed, it seemed a natural choice to use MRC again.

Poole was not convinced that it was the best option, however. “When you use Alimak, it’s a lot of manual labour, for a start, which we are trying to get away from,” he said. Despite a good safety record at Freeport – just one lost-time incident in over 15 years of use – the Alimak method can put workers at a higher risk than other excavation methods because it exposes them to the face of the development. And, he added, “When you put up a raise with the Alimak, it has pretty uneven walls due to the drilling and blasting, and the mouth of the slot bells right out, so it makes it difficult for longhole drilling at a later stage.”

The DMLZ, which at full production will process some 80,000 tonnes of ore per day, will eventually require some 1,200 drawbells. Laid out in an El Teniente pattern, the drawbells funnel caved material from above into drawpoints in the extraction level for mucking. With that many slots to be excavated, any improvement in method would net big savings and minimize risks and exposure.

So Poole suggested the Freeport team look at upreaming (or boxholing) the slot raises instead. “Boxhole boring has been around for a long time. I’ve used it a lot in Australia,” he said.

“Frank, being a new manager coming to site, as all new managers do, brought his experience level and knowledge,” added Herault. “It was a new set of eyes for us, and a challenge we wanted to achieve.”

By 2014, Freeport began discussions with Redpath, which had experience elsewhere with the technology and method, about switching to boxhole raiseboring to ream the drawbell slots at the DMLZ. Initial conversations stalled, said Edwin Hernandez, a senior mining engineer at Redpath, but in 2015 the subject came up again. “I was pretty keen to make the change,” noted Poole.

“We presented the different machines we had to do upreaming,” said Hernandez. But to replace the 2.1-metre diameter, 12 to 20-metre long Alimak raises, Freeport required a larger reamer head than had ever been used on a boxhole machine before. “At that point, we only had up to 1.5-metre diameter reamer heads,” Hernandez explained. “Freeport wanted to find out if we could do 1.8 metres.”

Freeport issued a request for a proposal, specifying the requirements that contractors would have to meet. Redpath proposed a re-engineered design to its Redbore 50 line of drills – the Redbore 50X – with a 1.8-metre reamer head and a re-engineered deflector, which offers a high level of protection for the crew. Included in the RFP was a stipulation calling for an on-site trial of the new machine to prove its capabilities. 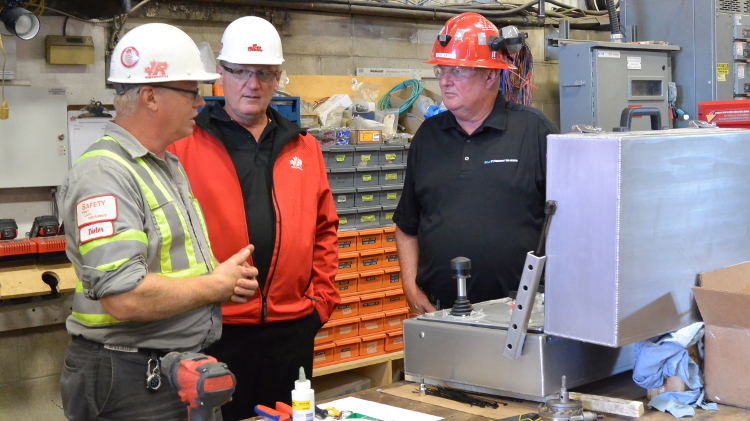 A four-hole trial was planned for June and July 2016. The trial was awarded to Redpath due to its quick response time to fulfill Freeport’s requirement. There were teething problems, however. The machine’s water requirements on site, both for reaming and for dust control, came as something of a surprise, said Hernandez. And some of the older drawbell development sites were a bit too tight for the new machine, so the floors had to be lowered to accommodate the 50X, explained Larry Hill, a technical expert for Freeport at the DMLZ. “But overall, there is not really a huge change,” Hill said. “It’s basically like the boxhole rig replaces the Alimak. It is still the same sort of process.”

Despite the early issues, the new method was an immediate hit at Freeport. The smooth, undamaged-by-blasting walls meant that collaring the raises was easier. It also meant a lower chance of rocks coming loose and falling. However, said Hill, “The biggest thing that we have seen has been our speed of drilling around the raise itself. We have saved so much time in not having to do re-drills and realignments. It has made life a lot easier. The drill comes in, drills and goes. It doesn’t have to stay there an extra two or three shifts trying to drill around the raise.”

By comparison, Poole said, “The Alimak takes about twice the time.” The limiting factor during the trial was often the readiness of site preparations.

Reaming the entire raise also allowed scheduling efficiencies. “With drill and blast methods, the policies and procedures in the DMLZ are such that you are only allowed to blast during the scheduled blasting times,” explained Herault. “The round may be completely drilled off, but you still need to wait four or five hours before you blast. That becomes non-effective time. With a boxhole machine, it is effective from the moment the men show up until the end of the shift when they leave. You’re not held back by scheduled blasting times to get your advances.”

The Redpath machines have another productivity-enhancing feature, too. The company is preparing to introduce remote drilling at the DMLZ this year, which will allow reaming work to continue even during frequent seismic activity, when workers must be removed to a safe zone underground.

The four trial raises were completed ahead of schedule, with no safety incidents. Freeport was so impressed with the performance of the re-engineered Redbore 50X that the machine simply continued working after it finished the trial. Freeport purchased a second unit, which arrived on site at the beginning of February. “Once we get right into it at the DMLZ,” said Poole, “we could possibly have three rigs working.” And, he added, the 160,000 tonne-per-day Grasberg Block Cave mine currently under development nearby could employ another five boxhole machines to help develop its nearly 2,400 drawbells.

“The whole process went very smoothly,” said Poole. “Redpath got in their raisebore experts from Australia, brought some specialized boxhole people from Canada, and they put it together very well.”

The boxhole machine may present more upfront cost than an MRC unit, admitted Herault. But, he said, the lower labour requirements, inherent safety advantages and productivity gains work in its favour, especially over the 20-year operational life of the DMLZ. “It’s so much easier to drill the holes exactly where you want them,” Poole agreed. “Overall, we are saving a lot of money and minimizing risk.”

With success at 1.8 metres, the evolution of upreaming technology continues, said Hernandez. “Redpath has already manufactured two new drills, the Redbore 60, for two-metre upreaming for projects in Chile.”