B2Gold is off to a fast start at its Fekola mine in Mali
By Cecilia Keating
November 09, 2017 The mine was constructed in just over two years and is expected to achieve commercial production by the end of November. Courtesy of B2Gold

In early October 2017, Vancouver miner B2Gold celebrated the first gold pour at its flagship Fekola mine, and by the end of the month had already produced nearly 34,000 ounces. While initially not expected to begin producing until December, Fekola has been constructed in just over two years and is expected to reach commercial production at the end of November – four months ahead of schedule.

The first doré bars at Fekola round off a decade of rapid growth for B2Gold, a mid-tier miner that has a strong background of constructing the mines it operates. In ten years it has evolved from a junior exploration company with zero output to the owner of five mines with an estimated production of up to 975,000 ounces in 2018.

Clive Johnson, B2Gold’s president and CEO, said the acquisition of the Fekola project is in line with B2Gold’s history of “accretive acquisitions of developed projects that are ready to build,” supported by the company’s historic “willingness to be contrarian.”

When B2Gold bought the property from Australian junior Papillon Resources in October 2014 for US$570 million, it faced zero competition. Johnson said he found this “very surprising,” given the “impressive” results of Papillon’s feasibility study and the property’s location on a well-known gold belt home to mines run by AngloGold Ashanti, IAMGOLD and Randgold.

De-risked through due diligence

Johnson said that the lack of competition for Fekola was a reflection of an industry marred by bad deals, shoddy business decisions and uneasy shareholders and investors. “It’s remarkable how many people, even in a conservative industry like mining, are risk-adverse.” He said B2Gold’s investors and shareholders backed the company’s decision to acquire Fekola because B2Gold “hadn’t made mistakes.”

The investment has paid off. B2Gold’s optimized feasibility study in 2015 demonstrated probable reserves of 49.2 million tonnes at 2.35 grams per tonne of gold, and a $15.4 million exploration drill program is ongoing in the area north of the current pit boundary. Johnson believes the potential for new discoveries is one of Fekola’s “biggest upsides,” with drill results to be released in the fourth quarter of 2017.

Moreover, the mining forecast for Mali is good; BMI Research reported in October that it expects the country’s mining industry to witness a value growth of 10 per cent from 2017 to 2021. “Now that growth is more in favour, most analysts say the bidding [for Fekola] would have probably started at a billion,” Johnson said.

Global Affairs Canada currently advises against all travel to Mali due to the threat of terrorism and banditry, and despite Fekola being far from the conflict in the north of the country, the company has not been completely immune to it. In 2015, two B2Gold executives were trapped in their hotel rooms as armed extremists stormed a hotel in the Malian capital of Bamako, taking 170 hostages and killing 19 people.

B2Gold, however, has distinguished itself operating in jurisdictions that at first blush may seem not worth the risk. The company has a proven history of success in regions such as Colombia and the Philippines. Prior to that, B2Gold’s predecessor company, Bema Gold, made a name for itself in the 1990s and 2000s running successful operations in Augusto Pinochet’s Chile and remote northeastern Russia. “Some of the best opportunities in the world are in areas where others are scared to tread, either because of a perception of lack of safety, or because of other [economic or political] reasons,” said Johnson, who formed B2Gold in 2007 with executives from Bema Gold.

He said B2Gold carefully gauges decisions to enter risky jurisdictions by being “very disciplined in due diligence.”

Inevitably, safety at the Fekola site is a top priority. “The company has implemented a series of policies and procedures that fit the current political situation in Mali,” said Lytle. Johnson stressed that the majority of conflict in recent years has taken place at the opposite end of the country, nearly 2,000 kilometres away. Meanwhile, Randgold has operated its Gounkoto mine 50 kilometres north of Fekola without incident since it opened in 2011.

The Fekola mine was built from scratch at breakneck speed by an in-house team that worked together on four other B2Gold and Bema Gold projects, the most recent being the Otjikoto mine in Namibia, which went into production in 2014.

In a rare approach for the industry, B2Gold does all its own mine construction. After being disappointed by contractors on a project in the mid-90s, Johnson decided to do away with outsourcing. “The model was, ‘why can’t we have it all?’ Be very good at exploration and also be good at bricks-and-mortar running mines and building mines,” he said.

Bill Lytle, senior vice-president of operations, said Fekola owes its early completion and precise budget to B2Gold’s in-house construction model. Because the commissioning group, construction group and design team were already assembled and working together in Namibia, front-end design and scheduling for Mali started early, on site at Otjikoto. All parties “took ownership” of the schedule, said Lytle, and the budget was developed very closely with the outside engineering firm, Brisbane-based Lycopodium and the seasoned construction team at the company. 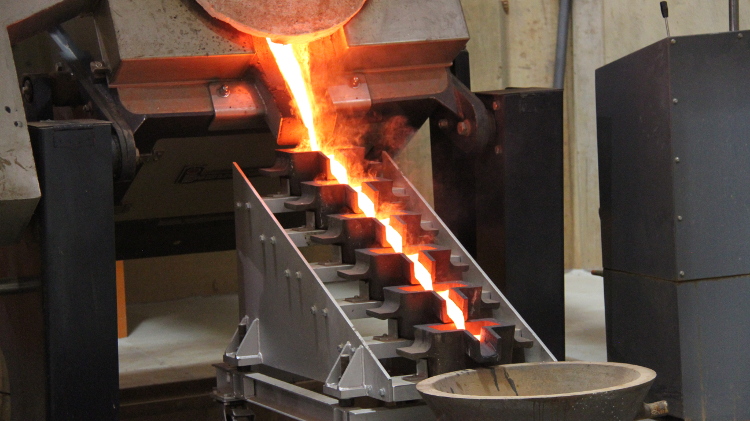 Fekola poured its first gold on October 7, 2017. Courtesy of B2Gold

“These guys have known each other for so long, in excess of 20 years,” Lytle said of the B2Gold team. “There’s a culture of accountability and responsibility.”

Lytle was dispatched to the Fekola property early on and served as a key link between head office and on-site operations. As a result, quick decisions were made with the full support of the company.

Early site earthworks started in the first months of 2015, as did the construction of the 50-kilometre gravel access road connecting the site to the main road. The capital, Bamako, is about a seven-hour drive from the site and the port in Dakar, Senegal, a 36-hour trip. An airstrip built on site connects Fekola to Bamako in one hour. “It’s really not that remote,” said Johnson.

Nevertheless, procurement and logistics were a key consideration early on, given that all supplies coming from the port in Dakar have to cross two borders. The key to success here, according to Lytle “was using our own logistic team, with integrated hubs in Vancouver, Dakar, Bamako, and Fekola.”

Mali’s torrential rainy season between May and October meant special attention was given to giving roads the correct grading. To date, Lytle said operations have not suffered or seen a lot of downtime from rain, but acknowledged that he was only “speaking from one year of operations experience.” The feasibility study estimated the mine will see a 15 per cent decrease of production during the wet months.

The Fekola deposit will be mined using a conventional open-pit method, and the mill on a conventional gold cyanidation process and a traditional crusher, SAG mill and ball mill circuit with pebble crusher. No new or novel technology is being trialled – it is all “tried and true” said Lytle.

The project’s impressive economics – an estimated pre-tax 35 per cent internal rate of return assuming a US$1300 per ounce gold price – rely on the deposit’s rich gold grade and scale. In September 2017, B2Gold announced that the annual production estimate at the mine had grown from four million to five million tonnes per year. The mill had already been expanded to accommodate this increase, and the mine’s heavy fuel oil/diesel power plant upped to 60MW, from 54. The increased tonnage cuts the all-in-sustaining-cost from US$752 to US$664 per ounce over the life of the mine, which was trimmed from 12.5 to 10 years. By late September the company had spent US$521 million bringing Fekola to production. Over the next decade the mine will average an estimated 345,000 ounces annually.

The Fekola mill is fully automated and is currently in the process of being commissioned. National employees are being trained on how to operate its distributed control system (DCS), whose hardware, software and control strategies were developed in-house by the B2Gold technical group and Metso. “This part of the world has probably rarely seen an automated, industry best practice system that we’ve got implemented here,” said Lytle, adding that training with mill operators started over six months ago.

During the construction phase, 200 employees out of a total 1,200 were expatriates, but B2Gold anticipates that this number will shrink and Malians will ultimately make up 95 per cent of the 950-strong operations workforce. This is a model applied successfully elsewhere, explained Lytle: “in Otjikoto, the number [of national employees] turned out to be more than 98 per cent.” In Nicaragua, it is also over 98 per cent.

More than 50 members of the expatriate workforce supervising construction in Mali are Namibians trained at Otjikoto – evidence, according to Lytle, of the “world-class training” and long-term investment B2Gold makes in its local contingency. 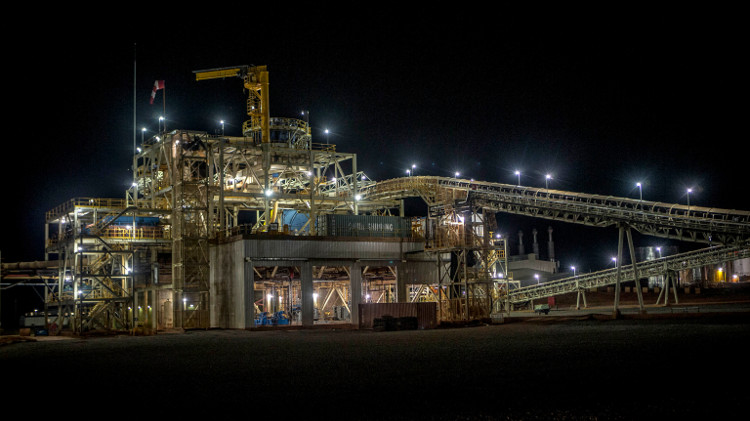 The engineering and design for the processing plant called for a throughput of four million tonnes per year, but the company opted to add 25 per cent to the  mill capacity prior to construction in anticipation of an expanded reserve. Courtesy of B2Gold

The company committed to hiring approximately 50 per cent of Fekola’s local unskilled labour force from within 50 kilometres of the mine site. To ensure hires remain local and no economic migrants flocking from other parts of the country – of which there were many – slip into that quota, B2Gold has registrars operating in local communities.

B2Gold is collaborating with Global Affairs Canada to run training programs both on site and in local villages to improve the technical and professional skills needed for both Fekola and other mines in the area with a special emphasis on health and safety. The company has also committed to boosting local enterprises unrelated to mining, like farming, gardening and sewing.

B2Gold has earmarked US$20 million for the relocation of a village currently adjacent to the mine pit. While Lytle conceded that though there was initial scepticism about the initiative taken voluntarily by the company, the compensation package, developed with outside Canadian consultancy firm rePlan, was accepted more than six months ago. Residents will be compensated for livelihood loss and any land lost will be matched on the new village site. Properties being built in “New Fadougou” will be equipped with solar panels, running water and spare bedrooms to rent out to inward migrants seeking employment at the mine. The relocation is expected to be completed over two years.

“Clive, as a CEO, has driven home this sense of social responsibility to make sure its win-win-win,” explained Lytle. “The government wins, the company wins, the local community wins.”