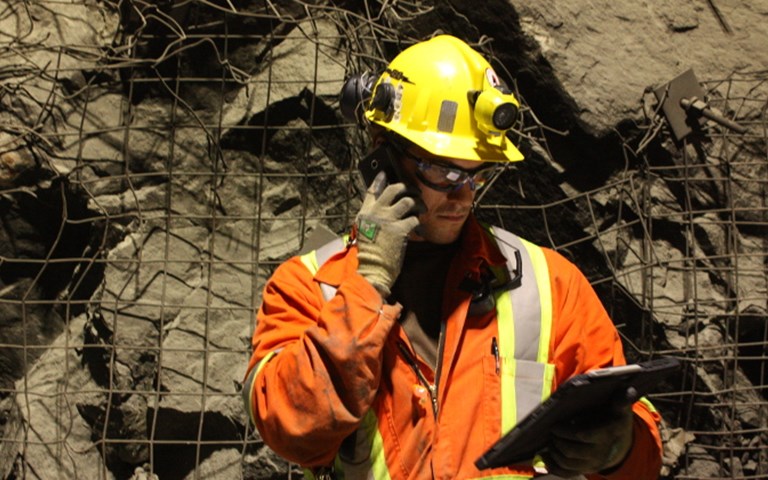 In the last two years, North American Palladium’s (NAP) Lac des Iles mine, located 106 kilometres northwest of Thunder Bay, Ontario, has made a complete technological turnaround – beginning with its first fibre-optic installation in 2015 up to the launch of real-time mine management in 2017. Advanced as part of a broader improvement program, the rapid succession of new technologies found acceptance because it came with careful attention to the needs of the mine’s workforce. Management at Lac des Iles hopes that investing in these technologies will improve its production efficiency and set an example among Canadian mines.

“Our mine site’s really been on a constant change since 2013, when we went from a ramp access mine to a shaft access mine,” said general manager Bryan Wilson. That was the same year that Jim Gallagher moved into NAP’s corporate office in Toronto as COO with a vision of a world-class palladium mine that would produce safely at low-cost and for a global market. In 2015, Gallagher took the reins as president and CEO.

Over the last four years, Lac des Iles has transitioned to a different mining method (sub-level shrinkage), which NAP credits with a 30 per cent increase in daily underground production in 2017. The company hopes to increase daily production by another 20 per cent by continuing the mining method changeover, but also by bringing in real-time mine management.

The past two years of digital evolution at Lac des Iles started with just one project: The team wanted to improve its microseismic monitoring capabilities by connecting fibre-optic cables to existing sensors so that the data could be collected in real time. In the existing setup, anyone looking to retrieve these data had to drive underground and bring a memory card back up to surface. In 2015, Lac des Iles extended the fibre-optic backbone from the 825-metre mine shaft to the lower extremities of the mine.

David Galea, manager of operation excellence, said what came next was driven by this question: “Now that we have this backbone that was based on microseismic monitoring, how can we use it for other things?”

The obvious next step was to install a Wi-Fi network underground to allow monitoring of the haul trucks, which had been a production bottleneck. NAP chose Toronto-based Northern Lights Technologies as a partner, and in late 2016 began to put in wireless hotspots and increase its surface server capacity to hold all the data it anticipated collecting. The fibre-optic backbone was extended from the shaft to the ramp network. Right now, there is wireless connectivity on the lower twelve levels of the mine, where most activity takes place. This year and next will see the expansion of the network into the upper areas of the 28-level underground operation.

When the company turned its attention to equipment monitoring, it chose two types of technologies for the mine’s trucks: RFID tags and Symboticware equipment health monitoring. Every time a truck passes a hotspot, it sends an update to surface about the oil pressure, engine temperature and other key health metrics to help predict and prevent maintenance downtime.

The RFID tags on trucks communicate their location, which mine coordinators on surface are able to track using Northern Lights software. Tags were recently added to cap lamps so that personnel location can be tracked as well.

“To be able to pull all these pieces together, we’ve started setting up a control room on surface where we have full-time mine coordinator coverage,” said Galea. The mine coordinators will line up daily tasks and activities based on personnel and equipment status. Although they currently set production goals on 12-hour intervals that match the work shifts, the vision at Lac des Iles is to condense them. Intervals will go from 12 to six to ultimately real-time management as the coordinators become accustomed to the volumes of information they now have available.

“There’s nobody telling us how to do this,” said Wilson. “[Dundee Precious Metals’] Chelopech is probably the only one that’s driving as hard as they are in terms of controlling real-time work. So we’re using a little bit of their model, we’re inventing our own model as we go.”

Wilson characterized NAP as a small, lean organization under pressure to see success as quickly as possible. The company attained profitability in the second quarter of 2017, but much of the last seven years of operation has been a struggle against low palladium prices, low production rates and company-specific factors.

To move as fast as it needed to, NAP had to make sure its employees were equally quick to get on board with proposed changes. “The ability to move as quickly as we have is a cultural shift for the organization,” said Wilson.

Galea compared the digital evolution at the mine to the way Lac des Iles worked on developing a safety culture. In a safety culture, risk assessments or five-point checklists have to precede decisions. In an information-rich environment, Galea explained, a supervisor responds to a broken-down LHD by relying on the coordinator’s awareness of tradeoffs and priorities. “It’s looking at that information and saying, ‘Who’s the closest mechanic to me?’ rather than having to go on the radio and just find whoever responds first,” he said.

For frontline supervisors, this represents a significant change to the role they play. Before, they were left alone to do a lot of troubleshooting based on their own limited view of the operation. Now, with 12-hour production goals and real-time information, said Galea, “there’s a much broader view available to that supervisor, and it’s really about helping them change the way they manage: going to the coordinators and asking the questions and looking at information to be able to make better-informed decisions as they go.”

What has to change in a system switch like this is not just the procedures but how employees experience ownership of their work. “The supervisors are good firefighters,” said Wilson. “I think they see the problem they’re having as their problem – but it’s not. When they’re having a problem, it becomes all of our problem. We all want to fix it as quickly as possible.”

Galea and Wilson see it as critical to get input, not to force tools into people’s hands. For example, the company originally talked about getting tablets for supervisors. But in consultations, someone suggested that cell phones would be more useful and more familiar. In August 2017, the company started buying phones for supervisors to use underground.

“It’s important to bring everyone along the journey,” said Galea. “I could come up with 50 different pieces of information that I could throw at a supervisor and prioritize the delivery of that info in my own way. But my order of priorities might not be the same as what the supervisors believe is valuable as an end user.”

With the introduction of personnel tracking, employees asked how the information would be used. “People have concerns about being tracked if they don’t understand the purposes for it,” said Galea. “Right now, what we do is more on an as-decisions-needed basis. If there’s an issue that a supervisor or a coordinator needs to deal with, then they can have access to the information for decision making. For example, if the supervisor has a truck down in the ramp, he can call the control room and ask which trucks are above the breakdown and relocate some of the fleet to different loading locations to minimize the impact on production.”

Overcoming resistance is all about continuously explaining this kind of reasoning and, when an employee does not want to participate, finding the right person to discuss the issue with one-on-one instead of letting it circulate. “I think people get nervous about change when they don’t understand what it’s for or what’s going on,” said Galea.

He said he hopes the changes implemented at Lac des Iles can make it a Canadian success story. “In Ontario and Canada, we’re up against countries that have cheaper power, we’re up against countries that have cheaper labour costs, and we have to be good at our jobs,” said Wilson. “We’ve already seen some success, but we’re hoping that with some of the stuff that we’re working on, we’re going to see better production rates, faster development rates and reduced cost per tonne. Where we hope to take this, is just to be better at our jobs. We’re bringing everybody along for the ride and learning as fast as we can to be able to pioneer some of this stuff.”