The tightrope between two worldsMartha Manuel is building partnerships with First Nations at New Gold’s B.C. operations, but this often means walking a fine line between the cultural beliefs she’s been raised with and the industry she works in. Part of our We Are Mining series

Martha Manuel is building partnerships with First Nations at New Gold’s B.C. operations, but this often means walking a fine line between the cultural beliefs she’s been raised with and the industry she works in. Part of our We Are Mining series
By Kylie Williams
February 23, 2018 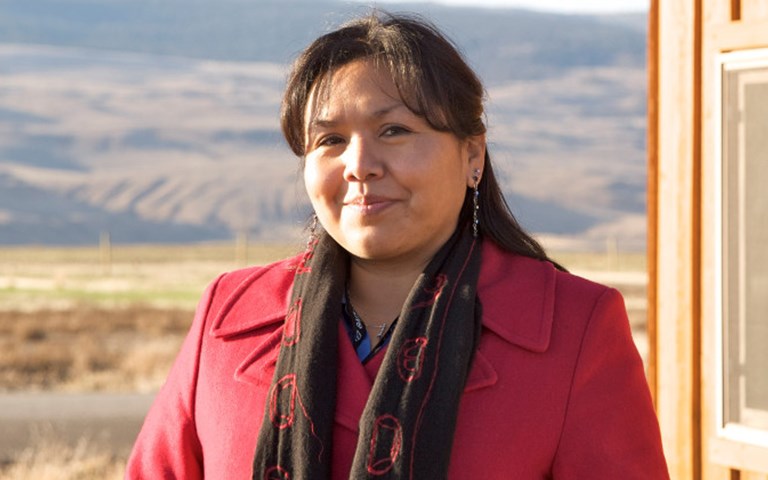 Martha Manuel uses the traditional teachings of her people to build relationships with First Nations communities in her role at New Gold. Kristopher Grunert

When Martha Manuel was first offered the First Nations co-ordinator role at New Gold’s budding New Afton mine in 2008, her response was a firm “no.” Manuel’s family is vocal about Indigenous rights and title and initially she was against the idea of working in mining. Her father, the late Grand Chief George Manuel of the Secwepemc Nation, was a leading Indigenous activist and had played a pivotal role in the Constitution Express movement in the early 1980s, protesting the lack of recognition of Indigenous rights in the proposed patriation of the constitution by Pierre Trudeau’s government. But, after some convincing from another influential community leader, the late John Jules of the Tk’emlups te Secwepemc, Manuel made the decision to join New Gold and help Jules shape a new era of participatory relationships between mining companies and First Nations communities.

A decade has passed, and Manuel was recently promoted to senior advisor of Indigenous relations at New Gold where she is responsible for ensuring communications flow between the company and the communities impacted by its operations in British Columbia. She spoke with CIM Magazine in February about her difficult decision to take on the role 10 years ago, how joint implementation committees help maintain the Indigenous workforce at New Afton at 23 per cent, and what barriers we still need to overcome to become a truly inclusive industry.

CIM: Was there a personal experience, mentor, or specific turning point that led you to where you are today?

Manuel: My whole life has been based on doing things differently to create relationships between First Nations communities and the forest industry, or the mining industry, or with government. Those teachings were derived from my late father, because he had a way of building relationships with the government during the years of his leadership and opening doors of communication. A lot of the work that I’ve done so far at New Gold has come from John Jules’ teachings and his mentorship during those initial few years of taking on the role. He was very inspirational.

The most important message I received from John, the elders and the various community members I spoke with before taking the job at New Gold was to maintain our traditional knowledge, culture and beliefs and include it in as many conversations with New Gold as possible.

CIM: Do you sometimes feel like you’re caught in the middle?

Manuel: It is challenging. I rely on the elders’ teachings and their support, especially during those challenging times when I’m caught between New Gold and the First Nations communities that I work with. I’m often walking between two different worlds, and, at times, I’m challenged by my own personal beliefs and the traditional teachings of my grandparents and my late father.

More recently, I’ve been connecting with other women working in mining, who are facing similar challenges in their roles. The more we share, the more we find our challenges are similar.  And as we continue to build this network of strong women, we’ll overcome those challenging moments. I recently participated on an ‘Indigenous Women in Mining’ panel at the AME Roundup conference, in Vancouver earlier this year, and am also working with the Canadian Aboriginal Mining Association (CAMA) to develop a panel presentation of women in mining at the conference in November this year.

CIM: Are you able to use your experience in negotiating and implementing participation agreements at New Afton to build trust with First Nations around the Blackwater exploration project as it grows?

Manuel: I build relationships with First Nations communities as per the traditional teachings of my grandparents, which is similar to how I started work with the Stk’emlupsemc te Secwepemc Nation (SSN). [New Afton is located within the SSN, which is comprised of Skeetchestn and Tk’emlups te Secwepemc.] I spend time within the communities and the leadership and get to know them and allow them an opportunity to get to know me, and work towards building a foundation of trust.

I’m bringing people together in a circle. As long as we keep talking and having those conversations and continue building the relationships, we’ll endeavour to get stronger, and we can continue to work together to create capacity, transparency, and accountability. I strongly believe that the participation agreements are the outcome of a strong relationship.

CIM: What have you found really works when implementing participation agreements with First Nations?

Manuel: At New Afton, Rainy River, and Blackwater, we have set up joint implementation committees (JIC) - comprised of community representatives and New Gold representatives. The JICs ensure that communications are flowing back to the leadership and to the communities, as well as providing an opportunity for the communities to ask questions or express concerns about any of the current operational activities.

What makes the New Gold JICs successful is there is trust and consideration as to who represents the community. Ensuring information gets back to the communities makes a difference. The JICs are a technical working committee. They make recommendations to overcome challenging situations between New Gold and the communities. If a situation comes up where some information needs to get out to the communities, then it’s up to the JIC to make a plan to deliver that information.

Manuel: Twenty-three per cent of employees at New Afton are Aboriginal. The JICs play a vital role in addressing any concerns in relation to hiring, education, and training, because when they see an opportunity, they’ll bring the idea to the JIC meetings. The JIC will encourage New Gold to consider other ideas for developing people and building capacity.

Although we have the participation agreement in place, it doesn’t mean it’s set in stone. If there are other opportunities that come up out of these JIC conversations, or at the SSN Executive level, then New Gold will take time to consider whether or not it’s an opportunity that will work towards sustainability in some way, whether it’s a band member’s job, or a business or environmental opportunity.

CIM: Are there some mistakes that the mining industry keeps making that are stopping it from becoming truly inclusive?

Manuel: The main barrier is the assumption that the mining industry knows what’s best for the communities. By developing programs – whether it’s an education training program or providing funding that could develop some kind of project that’s going to be in the best interest of the community – without taking the time to have those conversations with the community. Those assumptions can sometimes lead to further challenges in the community even though they they may be well-intentioned. Without having those conversations with communities, planning accordingly and managing expectations you can almost make things worse rather than making them better.

Another consideration is the cultural differences between communities. Not all communities carry the same traditional beliefs or protocols. That is very important to remember.

Manuel: For the most part, I do. My family was supportive as I evolved in my role but over the years, I lost a lot of family relationships. That’s a sacrifice I made to be able to do the work that I’m doing. I know that if I didn’t have the support of extended family relationships that I’ve developed through the years with the First Nations communities I work with, I wouldn’t still be doing the work I’m doing now.

The most rewarding is when I’m talking to the youth, because our people are always considering seven generations ahead. When I look at my sons and how proud they are of their mother and the work that I’m doing, that means a lot to me, given the sacrifices I’ve made. They are going to carry on what they’ve learned from me, including the legacy of their grandfather, and from other members of our family who work hard to help develop these relationships between First Nations and industry and the government.