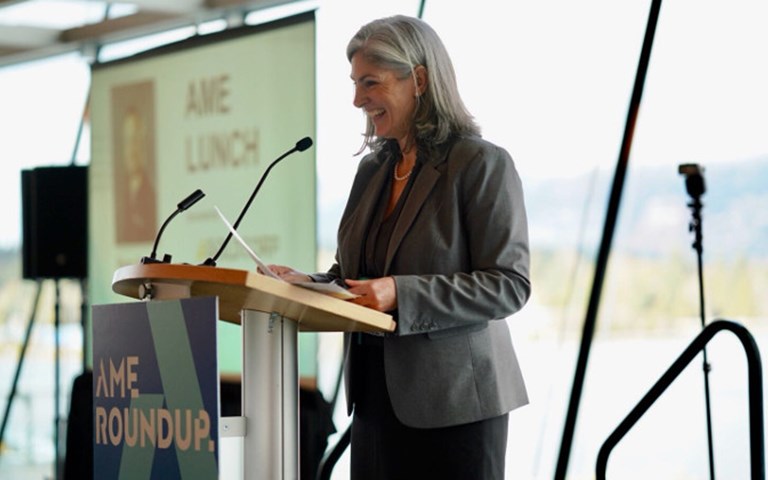 AME’s new president and CEO Edie Thome said new features at the conference, like the Innovation and Prospect Generator hubs, were designed to “modernize the image of mineral exploration and mining." Velour Productions/Association for Mineral Exploration

Mineral exploration activity in British Columbia increased by 20 per cent in 2017, Gordon Clarke, the director of the British Columbia Mineral Development Office, announced on the opening day of the Association for Mineral Exploration's (AME) Roundup 2018 conference. It is the first annual increase since 2012, said Clarke, and a concrete indicator that B.C. explorers have survived the downturn of recent years.

Under the banner of “A New Generation of Discovery,” this year’s Roundup focused on the role of the B.C. exploration industry in finding and extracting the materials required for a clean energy future. New additions to the conference program, including the Innovation and Prospect Generator hubs and the Reconciliation Breakfast were designed to “modernize the image of mineral exploration and mining,” AME’s new president and CEO Edie Thome said.

It was the first Roundup conference for Thome, who was appointed in June 2017. Thome is not new to the resource sector, having come from BC Hydro where she was responsible for permitting and compliance, Aboriginal relations, and public affairs for B.C.’s controversial Site C hydroelectric dam project.

“We’re expanding out beyond our own community to show new audiences that the mineral exploration and mining community are leaders in innovation and reconciliation,” said Thome. “There’s a movement worldwide to reduce emissions and our contribution is critically important. We want to make British Columbians and Canadians proud of our contributions on that world stage.”

Related: The number of new mineral discoveries has been dropping for years. But emerging technology and creative thinking could be the ticket to the future of mining

During his keynote address to the Chair’s Welcome Dinner, clean tech investor, author and speaker Tom Rand explained that “clean tech is not a sector” but the basis for the low carbon economy that will be a reality in under a decade. He urged all businesses and industries that use energy or produce carbon dioxide, including mining, to “adopt fossil fuel-busting technology ten times faster than we are now” to meet climate goals, and complimented Goldcorp on its move away from diesel to battery-powered equipment at mine sites.

“We’re not going to solve this problem with incremental change,” said Rand. “We need rapid, radical change to the way we do business. Gearing up for projects that will last 30, 40, 50 years… it’s prudent to think of ways one can gain economic advantage by seeing what’s coming and getting there first.”

Mungall also welcomed the latest public geoscience data release from Geoscience BC, which revealed the results of a 9,600-square-kilometre magnetic survey over of north-central and northeastern B.C., the third phase of the multi-year Search project.

Held in Vancouver from Jan. 22 to 25, the conference was attended by more than 6,570 participants from 39 countries, the highest attendance in three years and an 11 per cent increase over 2017.