Five developments that will shape the year ahead for minersBlockchain, increasing environmental legislation and sustainable supply chains among the trends that will affect mining companies in 2019

Blockchain, increasing environmental legislation and sustainable supply chains among the trends that will affect mining companies in 2019
By Matthew Parizot
December 20, 2018 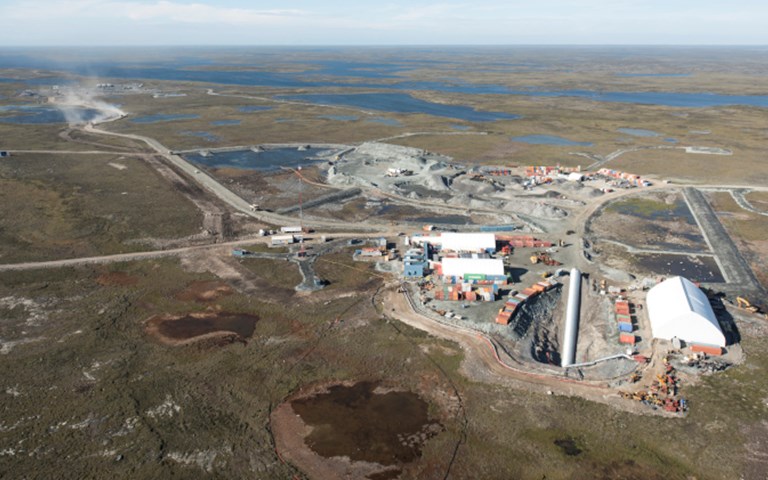 Agnico Eagle is conducting a feasibility study on using wind turbines to provide more power to its Meliadine mine in Nunavut. The company is part of a growing trend of miners adopting renewable energy solutions. Courtesy of Agnico Eagle

What is the beginning of a new year without a few predictions for the months ahead? For a glimpse into the future of the industry, skip the crystal ball and ponder the trends that are gaining traction right now.

Blockchain has moved beyond its origins in the cryptocurrency craze, and has demonstrated it can have value for multiple industries, including mining, where the technology has the potential to bring the buying and selling of precious metals into the digital age.

In simple terms, blockchain acts as a secure digital ledger that records all transactions publicly and chronologically. Already some companies are beginning to explore blockchain as a means to facilitate purchases of metals and minerals. In January, De Beers launched Tracr, a digital platform for trading diamonds, and partnered with Alrosa on its pilot in late October. Goldcorp has similarly teamed up with Tradewind Markets, a private blockchain marketplace for buying and selling gold and silver backed by the Royal Canadian Mint. Lucara Diamond acquired Clara Diamond Solutions, a digital platform that uses blockchain to track diamonds through the supply chain, in February.

The process for buying gold typically involves going through a bank or to an e-commerce site, where specific denominations of the metal can be purchased and then shipped. Not the most flexible system.

“What we proposed is something quite different,” Tradewind co-founder Fraser Buchan said. “Don’t worry about what the physical format is, your only concern is who’s holding the physical metal.”

Blockchain also allows a higher degree of transparency, giving buyers and sellers more information about what belongs to whom.

“You can get information on where it was poured, what date and who transported it,” Steve Lowe, Tradewind’s head of business development, said of the company’s in-development provenance application. “Between the Royal Canadian Mint [where physical metals traded on VaultChain are stored] and the mine, there’s a process of authentication, but ultimately the Mint will verify when it lands and which mine it came from.”

While the cryptocurrency trend seems to be waning, it won’t be surprising to see more mining companies using blockchain technology in the future.

Ensuring an ethical and sustainable supply chain is becoming a more important goal for miners. In the last two years, end users such as Apple, Samsung, BMW and Daimler have launched initiatives to make sure the metals they use are ethically sourced, often in response to shareholder demands.

Most recently, BMW, Samsung and chemicals company BASF have committed to trying to improve working conditions for cobalt miners in the Democratic Republic of the Congo (DRC), and Nespresso has committed to buying “sustainable” aluminum from Rio Tinto for its coffee capsules.

Companies like Rio Tinto, B2Gold, Barrick Gold and Agnico Eagle have put new systems in place or updated existing ones over the past two years to bring transparency and oversight to their supply chains.

“We are active in chain-of-custody programmes that provide consumers with the assurance that their minerals such as diamonds and gold have been responsibly produced,” Rio Tinto said on its website. “Our customers want to know that our materials have been produced in responsible ways. They seek greater transparency about the minerals and metals we supply, which makes responsible supply chain practices critical to our license to operate.”

In November, the International Council on Mining & Minerals announced that members of the organization would have to comply with the UN’s guidelines on human rights in business. With some of the biggest mining companies in the world focusing on supply chains, the rest of the industry will not be far behind.

Related: Increasing state revenue from mining operations and generating foreign investment among the changes to legislation around the world in 2018

As the growing knowledge around climate change adds greater urgency to coordinate a response, strategies for reducing carbon emissions are a top priority in Canada and other countries. A swath of new environmental regulations are either in process or being considered and will require some big changes from the mining industry.

Canada’s new carbon pricing plan has caused quite an uproar already – both Ontario and Saskatchewan have launched constitutional challenges to the plan, and Alberta has threatened to pull out based on the fate of Trans Mountain – but major mining countries such as China have been toying with the idea as well. Chile became the first South American country to implement a carbon tax in 2015, and Argentina followed in 2017 with a pricing system that will come into effect on Jan. 1. According to the World Bank, as of September 46 countries and 25 subnational jurisdictions have implemented a price on carbon.

Some companies – such as Hudbay, Teck Resources and Barrick – have set up internal carbon pricing plans already, and companies like Detour Gold and Yamana Gold have been following suit. According to BHP climate change lead Graham Winkelman, the push toward carbon taxes could be good for the industry.

“It’s challenging, but when we think of how a carbon price can potentially steer investment towards lower emissions outcomes, which over time will become cost effective, I think that’s a positive outcome for the industry, while at the same time contributing to addressing climate change. The mining industry has a real role to play in the solution,” Winkelman told CIM Magazine in 2017.

After a few years of trial and error, electric vehicle technology has advanced to the point that many miners are getting on board, and the number of orders for electric vehicles is climbing. Glencore, Vale and Goldcorp have begun preparing for all-electric vehicle fleets at future underground mine sites, and Quebec graphite miner Nouveau Monde Graphite is even planning an all-electric surface mine.

John Mullally, Goldcorp’s vice-president of corporate affairs and energy, said the company’s Borden project in Ontario benefitted from “a number of converging factors that meant the timing was right” for going all-electric. “Firstly, the technology has advanced considerably in terms of batteries themselves, so that made it possible to consider this type of operation. The other big factor is health and safety… [and] working conditions.”

Outside of powering vehicles, renewable energy solutions present an opportunity to reduce emissions and increase efficiency. Wind and solar power projects to augment or even eliminate diesel usage in remote areas are becoming more common, like Agnico Eagle’s proposed wind project to provide additional power to its Meliadine mine, currently in the feasibility study stage, and Barrick and Antofagasta’s Zaldívar copper mine in Chile, which is scheduled to be powered 100 per cent by renewables in 2020.

Hybrid energy solutions have also found an audience. The Saskatchewan Research Council’s (SRC) Hybrid Energy Container uses renewable sources, such as solar and wind, to cut the amount of diesel required at a site. While working to remediate the former Gunnar uranium mine in northern Saskatchewan, SRC used these containers to cut costs on buying and transporting diesel.

“It often happens in mining or exploration camps … where you’re hauling in barrels [of diesel] and the fewer you have to haul in the better,” SRC manager of development engineering Nathan Peter said. “And so … you are reducing your overall emissions, and you reduce your overall cost.”

African countries look to get more benefit from mining projects

Across the African continent a wave of new mining code reforms threaten to have significant impacts on the profits of foreign-owned mining companies operating in these countries.

Tanzania, for example, is making it compulsory for foreign-owned mining groups to offer shares to local and government companies; Ghana has begun to audit its entire mining industry to ensure compliance and the DRC is increasing royalties on “strategic minerals” like cobalt and lithium.

“It’s often because governments realize taxation was set too low during the liberalization of their mining and investment codes,” University of British Columbia associate professor Philippe Le Billon said. “This was justified by a need to attract initial investment, but with their extractive sectors maturing and prices increasing, governments want to raise those taxes.”

While companies have protested these new changes – with Randgold even threaten ing to sue the DRC – experts say the objective is not necessarily to drive companies out.

“My sense is not that this is a move towards renationalizing, or nationalizing the mining sectors,” says Ben Radley, a member of the Centre of Expertise for Mining Governance at the DRC’s Catholic University of Bukavu. “My sense is that it’s more of a move to try to exact more national benefit from that sector, which is pretty much run by multinationals.”